To all the cheerleaders I've hated before...

I hate ‘em. Oops! Did I say that out loud? Even at forty-three, I still hold a grudge against these perky Pep Squad types. I know it isn’t healthy. I know I should just move on with my life and forget that I never got to wear one of those short, pleated skirts and bounce around in front of the cute boys with a color-coordinated bow in my hair. I’m refusing to acknowledge the memory of not being popular and not being picked for the Homecoming Court. It’s fine because I didn’t grow up to be a brooding blogger who spills the details of her previously blacked-out teenage years to the world, right? RIGHT.

My disdain for those bubbly Barbie Dolls of the cheer team began before I even graduated from elementary school over a seemingly benign detail of their outfit: the Saddle Oxford shoe. 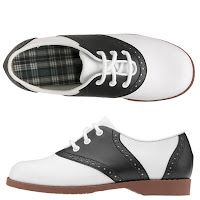 Oh, how I loved those black and white Saddle Oxfords! I couldn’t have a pair, though. The reason escapes me now, but they were probably too expensive or maybe not practical enough to wear with everything I owned. I remember only having church shoes, sneakers, and a pair of God-awful, high-top Hushpuppies that made me feel like Grizzly Adams in drag. (God bless 1975!) I coveted those awesome shoes and the green and white uniforms the girls wore as they cheered on the Dragons to victory. The tiny seed of jealously was starting to blossom.

Once I made it to junior high school, it became painfully obvious that an indisputable pecking order was in place:

1. Cheerleaders and Football Players
2. Everyone Else

Since it has never been in my nature to kiss ass to win friends, I did what I had to do to survive being in the nameless rabble of Nobodies: I began a private, deeply personal hate campaign against the Pom-Pom Queens. I kept my seething disdain to myself, skewering them mercilessly in my diary:

“Kevin asked Patty to go steady with him today. I’m sure it had absolutely nothing to do with the fact that she makes sure he gets a full view of her butt every time she twirls around at the Pep Rally.”


“I just LOVE how Karen sits Indian-style every time she wears her cheer outfit. Joe and Mike have been waiting ALL DAY to see her panties. Slut.”


“I hope Alicia gets her period when they wear their white skirts to the basketball game.”


As we made the transition to high school, I carried high hopes that the comradery of joining the marching band would ease my pain of being a bashful wallflower. Oh, how wrong I was. It was during those angst-filled years that I discovered how a girl with a short skirt and a big attitude was much preferred to one carrying a saxophone case and a heavy bag of text books. I felt like a Velma who was always in the shadow of a Daphne in the Scooby Doo episode of life. The final straw came in my senior year as the boy whom I believed to be my soul mate unceremoniously dumped me for barrel chested cheerleader with size two waist. I never got over it.

Even though I didn’t get to be the shining star at the top of the cheerleading pyramid, I did just fine as a mostly invisible adult in the corporate world. Honestly, the only cheering heard on the office cube farm is when a power outage forces the place to close early or when a record sales year translates into a bigger Christmas bonus, and that’s fine with me. Yes, I was floating along just fine on a sea of repressed memories until two months ago…when I signed up my daughter for cheerleading.

Dear friends, my daughter is now a cheerleader. (Deep breaths, Lynda. Deep breaths.) My sweet, caring, loving, daughter is now happily engaged in the one activity that I spent most of my life bashing. She backed me into a corner, and as I looked into her big, hazel eyes, I knew I couldn't refuse her this chance at fun just because some shrill harpie in stirrup pants and jelly shoes broke my spirit twenty-five years ago. I keep telling myself it's good exercise.  I have convinced myself that she is winning one for Team Nerd, of which I am the Captain. She has shown me that nice girls and even – dare I say it – smart girls know their way around some pom-poms and a basketball court.

For as much as I hate to admit it, I have also realized that swallowing crow is much easier when chased with a big cup of Maybe-I-Was-Wrong. So, this is my new cheer:

What does that spell?

Oh, shut the hell up…I get it…
Posted by If Only She Had Applied Herself at 3:18 PM