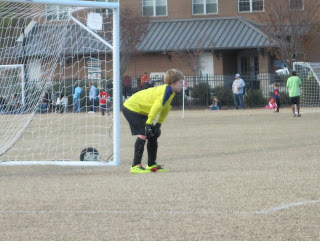 I have always been not-so-secretly glad that my son was never interested in sports. Although I hated the idea of spending my free time sitting on bleachers under the scorching-hot South Carolina sun while watching a game I neither cared for nor understood, I still felt obligated to goad him into a team activity. We fulfilled our parental duty by giving him a football, a soccer ball, a baseball and bat, but the child had zero interest in working up a sweat. Every offer at joining insert-name-of-league-here was met with a resounding, "No!"   When he was old enough to truly communicate his feelings about playing a sport, he put it very succinctly: “Mommy, I don’t want to play the game. I want to be the person who tells everyone else what to do.”  As a lifelong control freak, I have to say that his sentiment warmed my heart.

I became the Anti-Soccer Mom, relishing the fact that I didn’t drive a minivan, and I didn’t spend my weekends traveling to tournaments, and I didn’t have to arrange my life around practices and games. Honestly, though, there was always a little voice in the back of my mind that wanted my son to be a sports star. Who doesn’t? We all know that whether we like it or not, athleticism is favored over intelligence in our public schools. Sure, my son gets all A’s in advanced courses, but can he hit a homerun? He picked up German as if he had been plucked from the streets of Berlin, but if he has never scored a touchdown, then who really cares? I assured him that his hero, Apple founder Steve Jobs, was probably never the quarterback and star of the football team, but I think I was reassuring myself instead of my son.

At the end of fifth grade, he became friends with a few boys who were on a high-level, traveling soccer team, and, unbeknownst to me, he starting kicking the ball around with the kids at school. As the year was ending and we were preparing for the big jump to middle school hell, he came to me one night and said, “Mama…I really want to play soccer.”  In one of my less-than-stellar- moments as a parent I replied, “Oh, no. You aren’t serious, are you? Don’t you think it’s too late to start?”  I know it was wrong, but I desperately tried to talk him out of it.

Losing the battle, I reluctantly signed him up for a fall soccer league. While he spent the summer practicing diligently in our backyard, I spent the summer trying to gently (or not so gently) remind him that he had never played organized sports before, so he shouldn’t expect to be very good at it. I explained to him over and over that the kids he would be playing against have years of experience on him. What I saw as setting him up so that he wouldn’t be disappointed if he didn’t set the world on fire, HE saw as a complete lack of faith in his ability on my part. He said, “You’re telling me I’m a terrible player before I’ve even had the chance to prove that I can do it.”  I’m ashamed to admit it, but he was right.

The season started, and my son volunteered to be the goal keeper for the team. Due to scheduling conflicts with my daughter’s activities, his father took him to practices and the first two games. My husband kept telling me how great he was doing, but that’s what Dads are supposed to say, right? I took it with a grain of salt until the night they came home and my husband said, “The coach thinks he’s really good and that he has the potential to be a great keeper.” Really? My bookworm who used to spend his time building Lego cities and studying the road atlas? Hmmm...I would need to see this to believe it.

The first time I saw him play, I was so nervous for him that I could barely watch the game. Why was he so calm? Did he not feel the pressure of defending that goal against a field full of kids whose objective it was to get the ball around him? As he stopped every attempt from the other team to score, I started to realize that this child, MY son, has talent that isn’t related to algebra. The kid can play!

Their team went undefeated for the season. As we were walking off the field after their last game, another parent came up to us and said, “Is the keeper your son? He did a great job! He saved the game for us more times than I can count!”  I looked over at my son, and he was beaming.

The coach took the kids out for ice cream sundaes to celebrate a great season. I watched my son laugh and joke about blind referees and exciting victories with these boys and girls he had bonded with over the last few months. It was then that I realized how my self-doubts are my own, and that my children don’t share my glass-is-half-empty view of the world. That night in the chilly glow of the Dairy Queen lights, I realized what I should have known all along: My son rocks.
Posted by If Only She Had Applied Herself at 12:47 PM