You'll Shoot Your Eye Out!!! 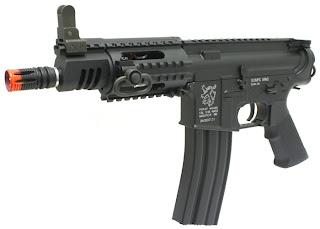 My eleven-year-old son wants an Airsoft gun.  With an arsenal of the Nerf variety already cluttering my house, I really didn't see the need to start a new collection.  We have so many of those foamy Nerf bullets spilling out from every drawer and crevice that we could probably pack and ship a baby grand piano in a pinch.  They're in the yard, too.  Every time I hit one with the lawn mower I hear, "Look! It snowed!"  Ugh.  So, why on Earth does this child need another gun?  (All together, now...say it with me.)  Because everyone else has one.

The name sounds so perfectly benign.  Airsoft.  Aiiiiirsoooooft. It's like a delightful mattress brand or maybe gel inserts for your shoes to help with those nasty bunions.  I have to admit that I'm not a fan of toy guns even if the name does invoke thoughts of a set of 1,200 thread count sheets.  I just hate to see a kid with a gun, and I come from a family chock full of military veterans and manly men who hunt for their meals (insert chest pump here).  Plus, this is the South.  You can't even spit your tobacco juice without hitting a gun rack in a pick up truck.  I should be beaten down to the point of submission on the gun thing by now, but unless the guns are neon colored or squirt water, it gets vetoed by the Queen.

After a year or more of relentless begging, I decided to check out this Airsoft craze.  For as much as my son desperately wanted one, I figured they must spew Cheetos or give answers to geometry homework.  To hear it from this child, you would think every kid in the Free World had one except him, and since I remember throwing the same line at my mom when I wanted a mood ring and a pet rock, I figured I owed it to him to at least Google the gun for good measure. (Google is now a verb.  Weird.)

The boy promised me the guns were completely harmless.  LIAR.  As a mother, of course the first topic I searched was "Airsoft gun accident images".  You must start with the lowest common denominator.  Kids do not possess good judgment when it comes to pointing a gun, and I wanted to see the worst case oops-I-didn't-mean-to-shoot-off-your-earlobe scenario.  It was ugly.  I saw broken teeth, punctured faces, and grown men who looked like they had the measles as they were covered in red holes from the pellets.

Next, I looked up the safety equipment suggested for those interested in cul-de-sac war games.  These completely harmless little toy guns seem to leave quite a mark if you aren't properly protected.  My favorite quote from one of the websites I visited insisted, "They can not kill a person or cause heavy bleeding like a real gun."  Nice.

You'll only lose your teeth and an eyeball or two unless you're wearing this:

And don't forget that you'll need one of these: 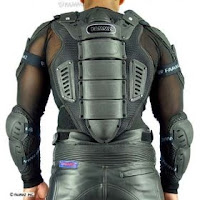 What is this?  Mad Max Beyond Thunderdome?   A weapon of suburban destruction for my kid?  Oh. Hell. No.

My son is heavy on the defense now.  He keeps searching the web for the pro to every con I give him.  My main concern is that, at eleven years old, he is still far too immature for a "toy" that can be used to strong arm his little sister.  I can see her taking the last bottle of Gatorade, and BOOM, one shot sends her straight to Sammy Davis Jr Land, sporting a glass eye for the rest of her life. This Mama is putting her foot down.

My husband, however, does not share the same sentiment.  He thinks the boy can learn responsibility by handling his gun properly and using it only as intended.  I say if he needs to work on his maturity, let's have him make sure the dogs have water each day instead of giving him the means to kill small animals.  This is playing out much like "A Christmas Story" with the mom adamantly against it and the dad sneaking around on the sly to have it under the tree on Christmas morning.

I'm afraid we have come to an impasse on the Great Airsoft Debate, and with December right around the corner, I have been practicing my line over and over again: "You'll shoot your eye out!"
Posted by If Only She Had Applied Herself at 9:03 PM