My in-laws were gracious enough to promise all of their grandchildren a trip to Disney World when they were young.  One by one, they took each set of grandkids to Florida for a week of Mickey Mouse-filled fun.  The problem that began to surface with this awesome plan was that my husband and I waited a long time to have children after getting married - nearly ten years to be exact.  By that time, my in-laws were well into their golden years, and we knew that putting off the trip until our younger child was old enough to enjoy the park was not an option.  We went when my daughter was only two years old, and unfortunately,  she has no memory of that week at all.

That trip to Disney was the only time my children have been to an amusement park.  Granted, that is the Grandaddy of all parks, and if you live in Alaska or Tibet where roller coasters are few and far between, that might not be a big deal.  However, I have a world-class amusement park right outside my front door, and I have never taken my kids there.  This is the first time I have ever let loose with this abominable secret in public because I know that by denying them this childhood pleasure,  I am guaranteed a spot in the Bad Mommy Hall of Fame.

I have my reasons for not taking them - many, many reasons.  Have you seen how much sweaty, smelly skin is exposed by patrons of amusement parks?  They hop on the water rides first, effectively washing off every drop of deodorant (if they wear deodorant) and walk around baking themselves in the sun all day.  Then, they rub up next to you in line or worse - you have to sit in the moist seat they just vacated on the ride you're boarding.

Speaking of the sun, I live in a place where meteorologists frequently warn you not to go outside because it's too hot.  Seriously.  Where else but the Sun are you told not to leave your house because the blazing heat will kill you?  The humidity is so bad here that being out in nature during the middle part of the day feels exactly the same as jogging around with a warm, wet washcloth over your nose and mouth.  It's Dante's Inferno kind of hot.  Plus, I really hate being flipped upside down, splashed with rancid water, and flung through the air on rides controlled by teenagers who think K$sha is awesome.  How smart can they be?  I think these are perfectly valid reasons.

My plan to avoid this bastion of over-priced drinks, funnel cakes and glow necklaces was going along just fine until last week.   While we were watching one of our favorite shows, "Bert, the Conqueror", my daughter unknowingly stabbed me right in the heart with one innocent question.  The host of the show was at Cedar Point amusement park riding roller coasters that qualify in my book as wet-your-pants kind of scary.  As my little daredevil stared at Bert who was screaming, laughing, and generally being freaked out in a good way,  she said to me, "Mommy, can we go there?  I'm going to ride ALL of those roller coasters."

My child had no idea that a full day's worth of this kind of action was in our own backyard, but I did.  Sure, she's seen the commercials but has never really pressed the issue of actually going there, so I certainly never brought it up.  Even my son, who you would think would be all over going to an amusement part, hasn't asked.  Secretly, I hoped they never would...until they were old enough to ride everything without "a responsible adult".  (Not that I necessarily qualify)

I walked around with a big ol' bag of guilt on my shoulders for a couple of days.  Why do I always project my hang ups on everyone around me?  Kids like roller coasters. Period.  Why should I deny them this experience?  Because I hate smelly rednecks in undersized tube tops?  I was going to have to suck it up (and hold my nose).

I bought us all season passes.  Yes, the summer is nearly over, but the park is open until late September, so we'll get in plenty of ride time.  I can't let my fears stop everyone else in my house from living.

I couldn't help but to buy this picture snapped of us while riding one of the coasters. Our faces sum up our personalities exactly.  My fearless husband and daughter in front, pure joy and excitement on their faces.  My son, the reserved one, pulls in close to me while managing a smile.  Then, there's me.   Just look at me.  I'm a basket case, but even as much as I hate to admit it...it was worth every penny. 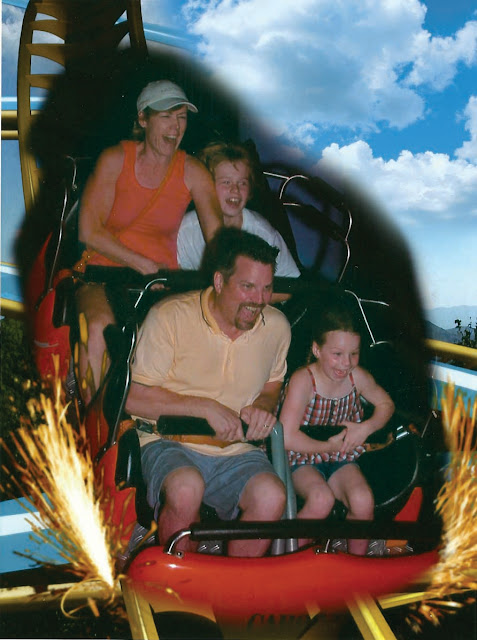 As the first night came to an end with a fantastic fireworks display and Katy Perry singing, "Firework" over the park's sound system, my nothing's-ever-fun kind of son looked at me and said, "This night was perfect."
Yeah....pretty much.
Posted by If Only She Had Applied Herself at 8:53 PM