How to Build a Renaissance Man - Part One

You can take everything I know about raising children and fit it nicely onto half of a postage stamp.  I am keenly aware of the fact that I suck in that capacity.  When I found out in 1999 that I was going to have a son, panic set in immediately.  Don't boys drive recklessly, break up with girls that won't sleep with them, and routinely pee on the floor beside the toilet instead of in the toilet?  Aren't they supposed to like "The Three Stooges," Miller Lite, and football?  I really hate those things.  I was worried, but the more I thought about it, the more I realized that even though I didn't know how to help him find the path to the Johnny Depp School of Awesome Manhoodliness, I clearly identified the one road I would block with every ounce of my I-am-Woman-Hear-Me-Roar strength...the road to Mama's Boy Land.  I knew that I had to build a Renaissance Man from scratch.

It started around the time my son turned eight.  As I was doing the laundry one afternoon in July, I realized that there were jeans, long-sleeved shirts, and even a hoodie in my son's hamper.  Only a bank robber would wear this kind of outfit in the South in the middle of a summer heat wave.  Knowing that my son hadn't left the cul-de-sac, much less scored a get-away car, I questioned him about the winter clothes.  It turned out that every time an article of clothing fell off a hanger, he would toss it in with the dirty pile to avoid the dreaded task of putting back where it belonged.  That day my son learned how to use the washing machine and dryer.   Did I feel guilty for making a third grader wash his own clothes?  Seriously?  Hell, no.  For as much as he complained at first, I explained in no uncertain terms that he wasn't picking cotton or plowing a field with horses, and instructed him to turn off "Phineas and Ferb" and get to folding.  I haven't looked back since.

It didn't take too long for my son to understand the value of money.  Whenever a birthday rolled around and cash was sent as a gift, he quickly spent it and asked how to get more.  "You have to work for it," I said.  "Only the Hilton and Kardashian girls get to sit around while money magically appears in their bank account."

We made a chore list and assigned a monetary value to each job.  He floundered for a while, sometimes working and sometimes whining that I was an impossible taskmaster.  I sat the boy down and told him the hard truth about life: It's not fair.  I explained that if he wanted my hard-earned money, he was going to have to clean to my standards, or there would be no exchanging of funds.  He quickly got with the program, knowing that there would be inspections each time he completed a task.  As mean as it sounds, I pointed out every missed spot on the bathroom mirror, every un-emptied garbage can.  I told him that my boss wouldn't think a half-ass job was acceptable, and neither would I.  What emerged was a boy who can clean a toilet just as good as The Brady' Bunch's Alice. 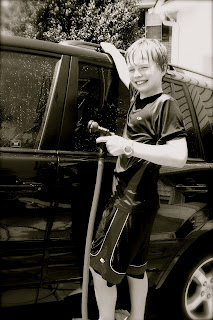 Instead of giving him cash, I created an imaginary bank, and we have a ledger for a "checking" account of sorts.  We entered credits and debits as he earned money and made purchases.  His epiphany came when he wanted an expensive soccer ball.  I said, "No way am I buying that for you....but you have plenty in your account if you really want it."  Ding! Ding! Ding! Ding! Ding!  Now, he's like the spawn of Donald Trump and Warren Buffett, begging to wash cars and scrub baseboards to earn more.  At eleven years old, he recently purchased his own smart phone, and we subtract eight dollars per week from his account to pay for his service plan. (Yes, I'm that tough.  Hey, growing up hurts, and it's a good life lesson to have a bill due every month, like it or not.)

Stepping out into the real world as a young adult will be so much easier for him having been taught how to balance a checkbook and that red shirts do not go in with white towels.  Now, I have a young man who knows two very important truths about life: money doesn't grow on trees, and Mommy's toilet better be April fresh.

**Next week: Step Two - How burping up stale beer and hot wings do not a Renaissance Man make...**

Posted by If Only She Had Applied Herself at 9:56 PM