Unless someone dies, my family generally makes every effort to avoid communicating with each other. I live in the same town as one of my sisters, and I haven’t seen or spoken to her since my mom’s funeral nearly three years ago. So when I received an e-mail last week from an older cousin who lives in a different state, needless to say, I was surprised. This is a woman in her fifties who never married and still lives with her parents. Her mother is not only my father’s sister, but was also my mother’s best friend since they were young girls growing up in a North Carolina mill town.  I had a feeling this might be an update regarding the failing health of her parents, but I was a little puzzled by her subject line, “Your dad’s fish”.  I opened the e-mail to find that, indeed, my aunt’s condition has deteriorated to the point of needing nursing home care, but as important as that news would seem to most people, she only spent one sentence explaining the dire situation. What she really wanted to talk about was a fish my dad caught thirty-five years ago, a dead fish that needs a new home.

I hate fishing. I don’t like worms, or getting up early, or  the rancid smell of a styrofoam bucket full of bait guppies, or sitting still just hoping that a fish who’s out looking for some lunch might fall for my clever little lure and bite, thus ramming a sharp hook through its mouth. I don’t eat fish, so the idea that you would catch and release them seems even more sadistic. I’ll bet the fish thinks the same thing. “Hey, thanks for throwing me back into a dirty lake with a festering head wound that will probably become infected with a scale-eating bacteria!” (I’m guessing there are at least a few neurotic, germophobic fish out there just like me.) However, my dad loved to fish, so as a child I was forced to tag along with my parents to their favorite fishing hole for hours of mosquito swatting, sun burning, dragon fly dodging, and whining out loud, “Is it time to go yet?”
My dad mostly caught crappie on these fishing expeditions. Once he was home with his bounty, he expertly handled the filleting, and my mom would fry them up Southern style with hush puppies and tartar sauce on the side. (I was the only kid in my neighborhood with a big, ol’ fish fillet board hanging above the kitchen sink.) The fish he reeled in were mostly unremarkable in size except for the one time he landed His Royal Highness, King Crappie himself. It was decided that this beast would not be dredged through flour and dropped into the Fry Daddy with the rest of the catch. No, no, no…this fish was to be stuffed and mounted, and as such, it held a place of honor near our battered front door for many years until my father died. (As you can imagine, our home never did make it to the pages of Southern Living.)
For reasons no one alive can remember now, my dad’s sister was lucky enough to have The Fish bequeathed to her upon his passing twenty-one years ago, and I’m sure she, too, gave this highly regarded (somewhat creepy and totally icky) stuffed creature a place of honor, probably inside a box in the corner of her basement if I'm guessing correctly. Now, my cousin has started the unenviable task of sorting through her mother’s possessions, and that’s how this ugly, long-dead fish ended up on my doorstep this week. 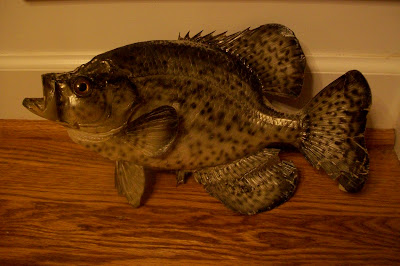 When I  opened the package, I let out a little scream.  What?  It was LOOKING at me with its beady little eyes!  Once I got over the initial shock of having a hard, dead fish in my hands, I couldn't help but think that this, my daddy's trophy, had a front row seat to all of the drama, tears, laughter, and tragic events that played out in that crowded living room on Linwood Street.
It saw the last two of six siblings stand proudly in their graduation caps and gowns, beaming with the knowledge that it would only get better from there. It witnessed children giving their mama a goodbye hug and kiss as they made their way into this big, mean world, and it watched that same proud mama hide her tears until they were safely out the door, not knowing when she would see them again.
If this fish could talk, it would tell you how a mama and daddy, now Granny and Papaw, were beaming with delight at the sight of their grandchildren coming through that living room door.  Not even the most stoic of men can stop their cold heart from melting with only the kiss of a curly-haired toddler.
And, finally, from it's spot high on the wall, this fish would have seen a hospital bed take the place of the sofa in that living room where my father spent the last six agonizing months of his life, eventually losing the fight against the cancer that consumed him.
So, yeah...a big, dead fish arrived in the mail this week bringing with it an unexpected flood of memories.  Now, if I could only figure out what to do with it...because I swear that thing is staring at me.
Posted by If Only She Had Applied Herself at 9:36 PM