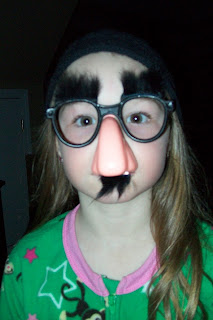 I was standing in front of the bathroom mirror early one recent morning scrutinizing my reflection as usual. It has become a daily ritual for me and maybe for other women facing the reality of middle age. The changes in my appearance over the last few less-than-stellar years are clearly evident. I see the stringy, unruly hair peppered with white and want to chop it off for good. I look at the flabby arms that refuse to get with the program even after the one million or so push-ups I do each week, and, depending on the lighting, those deeply set parentheses that surround my mouth can sometimes make me never want to smile again. I was having a good old-fashioned "I Hate Lynda Fest" when my six-year-old daughter came bouncing into the room.
I should clarify that this little ray of sunshine is not a morning person. She has already perfected the I-don’t-care-if-every-light-in-the-house-is-on-and-you-are-screaming kind of grumpy refusal to even flinch when it’s time to get out of bed every day. She is my Teenager in Training and would lounge in bed until noon if I let her. She puts on her clothes while half asleep each morning and slinks down the stairs to breakfast, so to see her fully dressed and downright giddy at 6:15am on a school day is highly suspect and more than a little unusual awesome.
She didn’t say anything to me. Instead, she just flashed an over-sized grin and headed for the digital scale. She stepped up, and upon reading the results, she pumped her fists in the air and shouted, “Woo hoo! Fifty-two pounds! I can’t wait to go eat and weigh myself tomorrow! You know what, Mommy? I bet I’ll weigh even more.” With that realization, she walked over and stood beside me in front of the mirror. She stared at the pillow-wrinkled little face looking back at her, the same face with serious bed head closely resembling a bird’s nest. She glanced at me, back at the mirror, and then smiled, giggling a little for effect. “What has you so happy this morning?” I asked.  Without missing a beat, she answered, “I am SO pretty! Aren't we both pretty today?”  She then proceeded to dash out of the room like a lightning bolt clad in a pink golf shirt and khaki pants.
My first thought was, “Where did I go wrong?”  No, I don't think I've ruined my Miss Congeniality of the elementary school set, but where did I go wrong with myself? When did I become such a Me hater?
I distinctly remember thinking I was awesome when I was a kid. I would stand in the front yard of our house and twirl my baton while dancing to a soundtrack playing exclusively in my head. Some days I would even ditch the baton and just prance around the yard like I was practicing some elaborately choreographed song and dance spectacular. I loved to swing and serenade the neighbors with my extensive knowledge of any and all Partridge Family tunes. If they were lucky, I might favor them with a Three Dog Night selection or two. I believed I was the second coming of Judy Garland.
However, in the span of time between my drooling over Leif Garrett in “Tiger Beat” and watching Madonna on “American Bandstand”, the game changed. I blame three decades of low self-esteem on MTV.  There...I said it. Once Duran Duran and their scantily-clad video models flashed across my television screen, crawling through the jungle with painted faces, I knew my own freckled face wouldn't be gracing the magazine racks after all. As a product of the television generation, I was bombarded by images encouraging me to be a porcelain-skinned, golden-tanned Pixie Stick who exists solely on Diet Coke and rice cakes. I eventually mourned accepted the fact that I wouldn't be “shaking my ass on the hood of Whitesnake's car”, and moved on.
Today, we are not only accosted by perfect humans on television, the world is lousy with them twenty-four hours a day. They are on our computers and popping up on our stupid smart phones. The Disney Channel is teeming with gorgeous tweens and teens who can sing, dance, and act (well, mostly). I preach to my kids that those seemingly awesome little performers they idolize have enormous help from stylists who dress them to computers that correct their pitch because many of them just can't sing in tune.  I want them to understand that it's mostly smoke and mirrors.  (By the way, I have also warned my daughter that if she ever ends up on Youtube doing bong hits and babbling incoherently,  she should be aware of the fact that her days are numbered.)
I'm still jealous when I see someone like Christie Brinkley who, at fifty-six, still makes me want to put a bag over my head, but maybe one day I'll embrace this face - this pale, wrinkled, tired face – as being, at least in the eyes of a six-year-old, pretty. Oh, and about the whole getting-on-the-scale-and-hoping-I've-gained-weight thing? HA!!!  Not in a million years.
Posted by If Only She Had Applied Herself at 10:12 PM