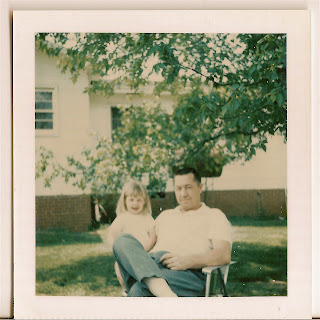 My father turned eighty-years-old at the end of January. Well, I guess I should say that the eightieth anniversary of his birth just passed. He died twenty-one years ago, a lifetime ago but like yesterday all at once.  An entire generation of people grew up never knowing this man at all. My kids didn't question why there wasn’t a Grandpa to go along with their beloved Granny. It had just always been that way. January tends to bring me around to thinking about him because it is both the month of his birth and the month of this death, and I’ll be brutally honest here: I really don’t think about him much any other time of the year.
To say that my father and I weren’t close would be a gross understatement. Until the last six months of his life, I made a conscious effort to avoid him at all costs. I resented him for not being the kind of man I expected him to be.  Is it so hard to hug your kids or tell them you love them? I hated him for not being the dad who wears a tie to work and plays ball with his children or helps them with their homework. I was furious because I didn’t have the Daddy whose lap you climb onto and feel protected from the mean, scary world.  More than anything, I wanted someone to protect me from him. He was never physically abusive, but more like the icy dictator who forced his minions to tip-toe around him, lest we wake the ire of the sleeping beast.
However, when someone - even your nemesis - is painfully dying of cancer, the river of hate flowing between you can sometimes be diverted long enough to let a little bit of sympathy and caring seep in, possibly even drying up the toxic feelings forever. When my father was diagnosed with terminal cancer, I wasn’t sure what I should feel. There was sadness of course, but only because my mother was devastated. I kept it to myself that relief  was the emotion that came to mind first. (Daughter of the Year, I was.) More than anything, I just felt nothing. I was twenty-one and stupid and consumed with myself.  I just went through the motions of doing what my mom needed me to do until he was gone, careful to suppress any feelings that might bubble to the surface.
Now that a couple of decades have passed, I’ve had time to consider what kind of legacy my father left for his children. We are, by definition, one of the most dysfunctional families around. We are scattered, disjointed and disconnected from each other, and I have stopped trying to mend that. It takes two (or six in this case) to tango.  I’ve embraced the idea that even though you are meant to love your family, you don’t have to actually like them. What I have also come to realize after twenty-plus years is that (gasp!) I am just like my father.  Even though we are cut from the same cloth, I - unlike my father - have the alcohol-free clarity of mind to work toward being a better parent. I know I fail most days. I’m ill-tempered. I’m moody.  I’m demanding in that I probably expect too much from a couple of elementary school kids (and the rest of the world), but I hug them and hold them and tell them I love them every day, and that alone means that I’ve done better.
I understand now that he wasn’t really the monster I painted him to be in my childhood. Like me, he didn’t have the clearest picture of what good parenting should resemble, and I have come to the place in my life where I don’t hate him any more. At the end of the day, I learned one very valuable lesson from my father if nothing else: how not to act as a parent.  For me, that’s big.
Posted by If Only She Had Applied Herself at 7:33 PM