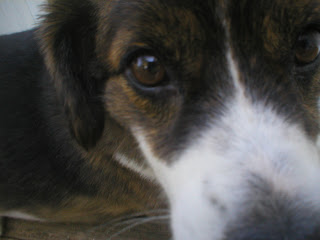 From the moment I decided to throw my daughter a semi-elaborate Princess party for her birthday, I figured it would be some good fodder for writing.  The story was practically written in my head before the party even took place.  It would be sweet and sentimental, chronicling a wistful middle-aged mom’s devotion to her precious daughter born late in life.  I would share how I gently (like a drill sergeant) enlisted the help of my family to pull off the best birthday a six-year-old girl could dream of.  I might even admit to the world that this was really more about it being the party I never had, and that I cooked up the whole scheme myself while under the influence of Disney/Pixar and Seven Deadly Zins.
I also considered going in another direction with the tale.  It’s no secret that I don’t like crowds or talking to people, or talking to people in crowds.  I can’t stand to be the one in charge of orchestrating any event, and I have serious issues when it comes to my house and cleanliness.  So, invite eight squealing girls into my home for a few hours, and voila! Madcap hilarity ensues.  There was so much good material in this party that the words were writing themselves.  However, this story isn’t about the party.  It’s about my three dogs, affectionately (not) known as the “Bumpus Hounds”  (an homage to “A Christmas Story” and a darn good description of the smelly mutts, too) and what not to do when traveling with Man’s Best Friend.
Party day was meant for Girls Only in our house.  In addition to all males being ordered to vacate the premises, I also declared the temporary Princess Palace off limits for any non-bipedal creature, so the whole hairy crew hit the road for the forty-mile drive up to the In-laws' house. What dog wouldn't be delighted at the idea of a field trip?  There are new trees to pee on and fresh holes to dig, and with a backyard full of unsuspecting squirrels, I assumed the dogs would prefer to spend the day at Grandma's house rather than to spend it locked away in a bedroom while giggling girls huddled just down the hall, taunting them.  I guess I was wrong.

My husband was driving on one of the busiest streets in town as they headed toward the interstate.  It's six lanes across and completely littered with fast food restaurants, strip malls, and pay day loan stores.   It is also home to about seven thousand out-of-sync stoplights, and the only time it isn't crowded is when we have a quarter inch of snow on the ground, and everyone is home eating white bread and drinking up the fourteen gallons of milk they hoarded when they heard the words "frozen precipitation".


The events that were about to transpire can be blamed in part on my son's insane love of overplayed eighties music.  The three dogs were in the back seat of the SUV, and the guys were up front when "Tainted Love" by Soft Cell came on the radio.  This one hit wonder is a favorite of my little Michael J. Fox/Alex P. Keaton wannabe, so he cranked up the volume.  This is where the madcap hilarity ensued. What the humans in the front didn't know was that the canines in the back were plotting an escape.  Is it because I force them to listen to yoga music?  They seem to like it.  They fall asleep every time they hear it.  Is it the fact that I buy cheap dog food?  They're all well-fed and healthy, so why should I spend big bucks on animals who find cat poop to be a delicious treat?  They obviously have no sense of taste.  Maybe it was just the need for a potty break, and they decided to seize the moment.

Whatever the reason for their wander lust, once the music was playing loudly, Bumpus Number One quietly stepped on the automatic window button and lowered it all the way down.  When the car came to a stop at a busy intersection, he jumped out, unbeknownst to my husband and son.  Now, he would have gotten away with his well thought out escape plan except that Bumpus Number Two decided to play follow the leader and jumped out after him.  Unfortunately for Number One, Number Two is dark brown and very furry, and as she leapt to her freedom, my husband caught a glimpse of her going past.  Our dogs were running wild in traffic, going as fast as they could in the opposite direction of our car.

My first thought upon hearing this was how awesome it would have been to be in the car behind them when two medium-sized dogs came flying out of the side window of the car.  How many times do you think the driver told that story yesterday?  My second thought was Holy. Crap.

My husband spun the car into the next parking lot and instructed our son to stay with Bumpus Number Three while he gave  chase on foot.  The good news is that Bumpus Number Three is an enormous Weenie Dog with no interest in life on the street. He was wagging his tail voraciously and thinking, "Yay!  More pepperoni for me!  Those fools don't know which side their Snausages are buttered on!"

Cars were stopping as some drivers got out to gawk at the spectacle of this forty-something Dad in a Ralph Lauren sweater running down our main drag red-faced and screaming, "Benji!! Millie!!"  My son reported that a couple of "older women" (in their twenties) stopped by to watch the show, and he overheard them say, "How stupid do you have to be to roll your windows down with dogs in the car?"  My son was quick to correct them, and said, "The dog rolled the window down by himself!"  With that one line, my son erased all doubt from the girl's mind that she was looking at a couple of crazy dog people.

The Escape Artists didn't make it very far, just a block or so when they were stopped by a fence at a nearby auto dealership.  A very kind employee helped to trap the wayward hell hounds and escorted them back to the car with my husband.  The windows were promptly rolled up and locked, and my husband wheezed and coughed for twenty minutes from the combination of dog hair, cold air, and involuntary aerobic activity.

Later that day when my son rushed into the house after the party was over with this wild "Marley and Me" type tale, I knew that any Princess story I might concoct was out the window.  Yes, the party was a success and went off without a hitch, and yes, I got many beautiful pictures of dainty little girls sipping from china teacups.  But the one picture I wanted but didn't get was of my husband sprinting through traffic at ten o'clock on a Saturday morning. Priceless. 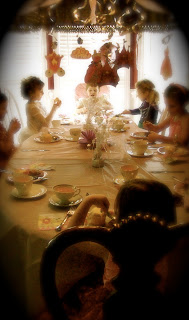 Posted by If Only She Had Applied Herself at 10:06 PM