To my son in his tenth year... 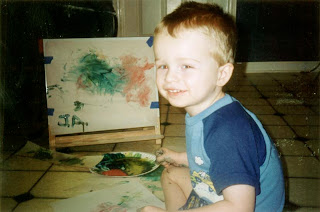 From the moment eleven years ago when I found out I was pregnant with a boy, I have struggled over how to raise a son. I knew only a few things about males - they don’t care about the toilet seat position or the arrangement of bed pillows. The clothes hamper is a mysterious contraption to them, and they tell too many fart jokes. I figured a girl would be much easier. You dress her in some pink bows, and tell her to not to hike up her skirt while you hide by the front door with a shotgun ready in case some teenager in a sports car wants to have his way with your baby. Even though the mean girl syndrome is reaching epidemic proportions, I think girls have less to prove than their male counterparts. Boys have to be tough, aggressive even, or they might as well have "mama's boy" stamped across their forehead.  And, it's safe to say that a cute girl in a marching band uniform is more acceptable than a cute boy in the same get-up.  They don't call them "Band Geeks" as a term of endearment, you know.

When my son was a toddler, I bought all the right “boy” things for him. His room was decorated in a sports theme, and he had a basketball goal, a football, and a bat and glove. We encouraged him to learn to ride a bike and kick a soccer ball like typical boys do, but he mostly left the athletic gear alone to collect dust in his closet. More often than not, I would find him creating elaborate “sprinkler systems” in the den with jump ropes and cords while pretending to be a landscape engineer. He would build a zoo with stuffed animals segregated by species. He would feed and water the animals and give you a tour if you showed interest. I thought his imagination was delightful, but sadly, I knew in the back of my mind how hard it is to be Creative Thinker in a Football World.

Now that he is on the threshold of his middle school years, the wall separating the tough guys from the not-so-tough guys is becoming increasingly apparent. I have already seen him teased by the neighborhood boys because he would rather play detectives than football. He brushes it off, but I know it stings. I also know that kids have a hard time seeing past this afternoon, so I want to tell him how it looks through the eyes of a Grown-up Dork who somehow survived public school on the outside of the “In” crowd.  This is for you, J...

1. Organized Sports Don’t Matter: This will be harder and harder to believe as you move through middle school and high school. Athletes are groomed to see themselves as far superior to those boys who can craft a clever work of fiction or perform a complicated piece of classical music but can’t kick a field goal or throw a touchdown. They are celebrated and idolized by not only other kids, but by teachers, principals, and parents. We all know this is true whether it is spoken or not. When was the last time you saw the High School Chess Club Champion on the front page of the local newspaper on a Saturday morning? Here is what you need to keep in mind: Bill Gates wasn’t a football star, but I’m willing to bet that some guy working the assembly line in one of his manufacturing plants sure was.

2. Never, Ever Stop Writing Stories: I’m just going to be brutally honest here. It is not cool to be a boy who understands the subtle nuances of writing an interesting essay. (And I’m sure you know the definition of nuance.) Your English teacher will love you, but that basketball star next to you in the locker room will probably shove you around to make himself feel tough if he thinks you are weak. I know you won’t see it in that moment, but you and your brilliant mind will always have the upper hand. Remember that you aren’t going to blow your knee out pushing your pen across the paper, and J.K. Rowling has more money than Brett Favre. (And more class…)

3. Keep Your True Friends Close: If you aren’t Mr. Sports Guy in school then you need to accept that you probably aren’t going to be Mr. Popular either. It’s just that simple. The class clown may garner attention, but those kids usually have issues. Seek out true friends who, like you,  prefer building robots to building a reputation as the Big Man on Campus. It won’t matter that you aren’t the Homecoming King if you are surrounded by real friends, those people who care about you only because of who you are and not the size of your house, your parents' bank account or the number of people who know your name. Popularity is fleeting and meaningless, but I know that concept will take years for you to understand, if ever. Most people never get it.

4. Be Proud to be a Geek: As strange as it may sound, some kids are going to be mean to you because you are smart. You might even get beaten up because you make an “A” in calculus. Hard to believe, right? Here is the truth about a bully: His mama doesn’t love him, and he has a long and miserable life ahead of him dipping a french fry basket into grease eight hours a day. Deep down, he is secretly jealous of your intellect and ambition. I’ll leave it up to you whether or not to throw him a bone and give him a minimum wage position in your multi-million dollar corporation. Now, lock arms with your Krelboyne Band of Brothers because the Physics Club rules!

5. You are Loved Unconditionally: Never, ever forget that one. It’s the most important one of all. I don’t care if you are an astronaut or a social studies teacher or a garbage collector. I will love you no matter if you can conjugate a verb or find the value of “y” because that is what moms do, even slacker moms like me. There is no problem so big that we can’t handle it together. You will have to trust me on that one. Life can be hard and, many times, cruel, but I am your rock, and there is no pumped up jock or self-hating bully with a meaner streak than me. I've got your back. I know that high school graduation seems like a lifetime away to you, but believe me when I say that it is nothing more than a hormone-and-acne-filled blip on the radar of life. You are destined for great things, and don't let circumstances or envious people convince you of anything else.

Oh, and about girls…they are bad….all of them. Now, go clean your room.
Posted by If Only She Had Applied Herself at 1:04 PM