I was sitting upstairs at the computer diligently scouring the internet for a way to end global warming and human suffering (either that or I was updating my Facebook status – can’t remember which), when I heard the garage door opening. My husband was home from his first ever training session for all newbie soccer coaches. He has me to thank for this gig, by the way.  Of course, not ONCE did it occur to me that by having him as the assistant coach, he would have to attend every practice and every game thus giving me the choice of sitting on the sidelines and watching seven year old kids run laps or sitting on my deck with a nice Merlot, watching the sun set in silence.  Nope, that thought never even came to mind.

When the league director sent out an e-mail to parents asking (begging!) for volunteers to help with coaching, I decided this was my husband’s new calling in life and signed him up right away. He balked at first saying, “But I don’t know anything about soccer other than you can’t use your hands!” The director assured him that all he needed to do is “point toward the goal, and tell the kids to kick the ball that way.” It didn't matter that he wasn't familiar with the rules or that he hasn't really exercised since the Clinton administration because “Hey, how hard can it be to herd first and second graders up and down a soccer field," said the twenty-something guy with no kids.

Being firmly in our forties, my husband and I aren’t exactly the typical parents of a five-year-old, as we have come to find out. During my daughter’s pre-school years, we felt a little obvious being the only parents with gray hair and a solid memory of life before cell phones and Britney Spears. We may not have walked to school in the snow uphill both ways, but we definitely have a stack of dusty vinyl albums in the attic, and we clearly remember the olden days when Music Television (MTV for you whippersnappers) played music videos…all day…every day. Most people think I must have had trouble getting pregnant because we waited so long to start a family. The truth is that we just decided to have lots of fun first – ten years of fun to be exact. Lots and lots and lots of fun, and then, when we started getting too old to have lots of fun, we had kids. Now, we juggle the AARP recruiters on one hand and little girl Princess parties on the other.

Even though I knew my husband would probably seem like the wise, old sage among the other soccer coaches, I figured he could handle it. He has no problem mowing the lawn with a push mower and carrying first graders up and down a few flights of stairs and with only minimal noise from his creaky joints.  I've seen him heave recliners and couches into pick-up trucks with the best of them while suffering hardly any discomfort, and since his back only goes out two or three times a year, there were no worries here! Really.

When I heard him come in from his practice drills that night, I waited upstairs for him to find me and tell me how this coaching thing would be a piece of cake. I waited…and waited…and waited. "Is he on the phone," I wondered out loud as I got up from the computer, leaving your photo album from that fabulous trip to Mexico to be "liked" at a later date.  I decided he must have made himself a snack and gotten sidetracked by a tornado movie or one of those Smackdown wrestling shows, but as I made my way into the den, this is what I found: 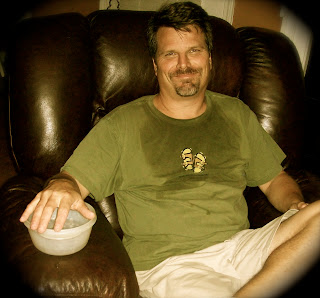 "What happened to you,"  I blurted out, doing the best I could to suppress inappropriate laughter. There he sat in the recliner, covered in sweat with his hand soaking in a bowl full of ice.  I tried to muster up some sympathy during my mad dash back upstairs to retrieve the camera.  (I am the Best. Wife. Ever.)  I felt this moment needed to be captured for posterity (and as fodder for blogging).  Strangely enough, he didn't think it was that funny.
"Ummmm, I thought you weren't supposed to use your hands in soccer?"
"We weren't actually playing soccer tonight.  We were learning drills to run with the kids, and I jammed my finger", he said as he lifted his hand to show me the swelling.
I felt terrible.  Maybe I shouldn't have sent him out there with those young guns who have no idea who Frankie is and why he wanted everyone to Relax.  A wave of remorse washed over me as I realized that maybe all that running up and down a soccer field might cause a disc to slip or gout to settle in or angina to strike or whatever other kind of malady that happens to old geezers like us.  Wow, had I just thrown my middle-aged husband to the lions?
Just as I was about to succumb to the guilt, I snapped out of it, rationalizing that profuse sweating and a sore finger were but a small price to pay for me to have one hour of sanity one night a week.
"Make sure you put the bowl in the dishwasher when you're finished with it," I called out as I headed back upstairs. "Oh, and be sure not to leave your shoes out either."
So, maybe I'll try for that Wife of the Year award next time...
Posted by If Only She Had Applied Herself at 4:04 PM