If you are what you eat, then I'm in big trouble... 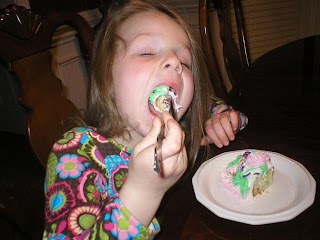 I am not a healthy eater. Seriously. I’m sure that other people perceive me to be a fitness nut, but that perception couldn’t be farther from the truth. I am vain, therefore I run. I am scared of gaining weight, therefore I eat foods that are lower in fat, but that could be marshmallows, Lucky Charms, pretzels or Tootsie Rolls depending on my mood. I am lazy, therefore I rely heavily on highly processed foods to feed my family. We are white bread, potato chip and Kraft macaroni and cheese kind of people. I know that I should be ashamed, but I never really thought much about it because all of the other Bad Moms in line at the grocery store also have carts overflowing with Cookie Crisp cereal and Banquet fried chicken strips. Plus, cooking isn’t really my strong suit.

However, everything I knew to be true about the food I’m shoveling into my mouth and putting into my kids’ lunchboxes has been changed by a series of events that have transpired over the course of this week. And, there is a strong possibility that I may never eat again. (Okay, so that’s a little dramatic...)

I recently began following the website of a young mother who has decided to eat only real food, and by that she means food that doesn’t come from a package, (or if it does, it has five ingredients or less), locally grown fruits and vegetables, grass-fed meat and dairy products from area farmers, and nothing with sugar, artificial sweeteners or white flour. Her list of “don’ts” sounds like everything currently sitting in my pantry and freezer. (Again, lazy.)

She challenged herself to stick to real food for one hundred days. When I read about her commitment, I just shook my head and let out a chuckle as I gave a wink and a nod to my good friend, Chef Boyardee. (The Chef and I go way back.) How or why would anyone do this? Wouldn’t it be terribly expensive and time consuming? If I’m out chasing down some farmer for his organic eggs and milk and spending hours in the kitchen making bread from scratch and chopping vegetables, please tell me when in the world I will have time to look at your vacation pictures on Facebook. “Deadliest Catch” isn’t going to watch itself, you know.

I’ll let you in on a secret, though: I was more than a little jealous of this woman and her quest for a healthier diet. In reality, I want to be that person. I want to be the mom with a fridge full of fresh fruit (say that one five times fast) and organic bread in my toaster. But, this is just some woman in cyberspace. Don’t believe everything on the internet, right? So, imagine my surprise this week when a friend tells me about her successful four week trial run on a vegan diet, and that she and her whole family are alive to tell the story.  She’s even getting kudos from her kids on vegan cupcakes. No. No. NO! I wanted her to say that she felt like a terrible mother for torturing her children this way. I needed to hear that she crawled on her hands and knees to the nearest greasy burger joint for a fix. Instead, she decided to carry on for another four weeks. (And, I land squarely on my face from the guilt trip I just took from serving Pop-Tarts for breakfast…)

The last entry in the you-don’t-eat-healthy-enough trifecta was my discovery of the PBS documentary “Food, Inc”. To say that I was appalled and disgusted by this behind-the-scenes look at the food industry in the United States is an understatement. The curtain was lifted between the grocery store and the process by which the food we eat gets there. And, it made my stomach turn. This isn’t a political statement. I encourage everyone to watch it and see if you can ignore the wretched conditions that surround the chickens that eventually become your grilled chicken sandwich or the cows that end up on your child's plate at your Labor Day Bar-B-Que. That whole “locally raised meat” thing is looking pretty good right now.

I have to make a change. It’s as if the Green Goddess of Fresh Produce has shown me the error of my DiGiorno-eating ways. I’m repenting right now for my Pillsbury Toaster Strudels and Fruity Pebbles. I vow to find a healthy alternative to Spaghetti-O’s and corn dogs. I know this will be an uphill battle at first, but I also know that my body and mind will thank me.  (Although, my bank account will most certainly take the hardest blow.)  My journey of a thousand miles will begin with a single trip to the farmer’s market. I just hope there is life after Chicken McNuggets.
Posted by If Only She Had Applied Herself at 12:52 PM