Whoever said to make lemonade when life hands you lemons can just suck it... 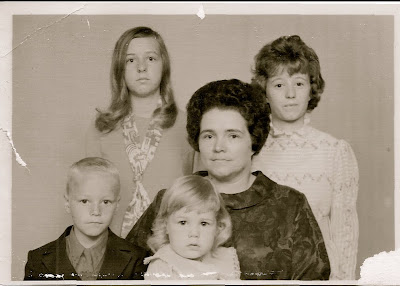 I have always hated August.  Even as a child, I dreaded its arrival because it meant the end to summer, the end to a carefree life of sleeping late, eating boiled peanuts on the back porch and chasing the city truck that sprayed for mosquitoes.  (What?  You didn't love frolicking in the chemical-laden fumes?)  August brings stifling heat and humidity to an already overcooked South whose people are feeling like they have died and gone to hell.  August is brown grass and a national debt-style utility bill.  August is an army of parents who are tired of hearing, "I'm bored".  August is dried out ferns and long-suffering impatiens.  August is purgatory just outside your front door.  Did I mention that I hate August?

I am not sure if it's a coincidence or karma that the worst event of my life so far - the passing of my mother - happened in the month that I love to hate.  Her death came at the end of August when Labor Day and the cool, crisp days of autumn are just out of grasp.  You know, those final dog days of summer when you stare desperately up to the heavens and promise God that you will never again complain when we get a quarter of an inch of snow, and there isn't a gallon of milk or a loaf of bread to be found.  Her death in that August two years ago was like an exclamation point at the end of a profanity-laced insult, and it still hurts like a raw, open wound.

This year, I quietly made a decision to keep my August-hating pity party to myself.  I have written at length on the subject, and I figure everyone has had enough of the "Poor little Lynda" side of the story.  Here is the grab, though - the more I try to push the White Elephant out of the room, the more it hunkers down, passes gas to annoy me, taunt me, and let me know I can't ignore it.

That big ol' elephant is right.  I can't ignore it.  I think about my mom every day, and the more I try to pretend that All Is Well, the more I can't think about anything else.  I wish she were still here to see how long my daughter's hair has grown and to see how she has matured as she is preparing to enter first grade.  I wish she could see how tall my son is now and could be here to listen to him perform the songs on the piano that he taught himself to play.  I wish she were here so that my daughter could sneak into her room at night and share Jelly Beans with Granny like she did before cancer, once again, turned my life on its head.

Shortly after my mother's death, I had an acquaintance from high school ask me, "Wow. What does it feel like to be an orphan?"  (I wish I was kidding.)  This is a forty-something businesswoman who obviously has no filter between her very large mouth and her very small brain.  I wasn't sure if this was a rhetorical question that she accidentally let slip, or if she was genuinely interested in finding out if my band of ragamuffin orphans was going to break out into a rousing rendition of "It's A Hard Knock Life" for the viewing pleasure of Daddy Warbucks.  I tried to satisfy her morbid curiosity as succinctly as possible by giving her my two-word response: "It sucks."

And that about sums it up for me.  It sucks, but life goes on I guess.  Like an old pot of coffee that needs to be dumped before a fresh one can be brewed, I need to pour out the gut-wrenching feelings in my head before any irreverent or snarky new thoughts can grow there again.

Now, go hug your mama.
Posted by If Only She Had Applied Herself at 10:42 PM