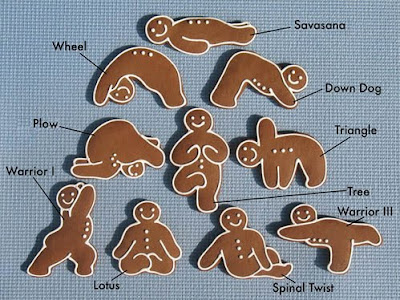 I do yoga.  Well, I should rephrase that because no self-respecting yogini would "do" yoga.  We "practice" yoga, you know, because no one is perfect, Grasshopper.  I'm not sure why other folks start a yoga regimen, but my revelation came after watching an interview with Rosie O'Donnell. (Okay, there are so many wisecracks I could insert here, but it's just too easy.  I'm going to take a deep breath and abstain.)  Rosie was talking about her good friend, Madonna. It seems that Madonna had always been a total hard ass when it came to exercise and a healthy diet. (Hmmm...that sounds vaguely familiar.)  But, once our Queen of Pop began her spiritual journey on the path to extreme bendy-ness, she felt at peace with actually eating a cupcake at the birthday party for one of Rosie's many kids.  All I took away from this interview was the following equation: Yoga = Cake Eating, and I was in the down dog position quicker than you can say "loud-mouthed, obnoxious, talk show host."

Of course, Rosie lied.  I quickly found out that, in fact, doing yoga does not release some Super Human Hormone that gobbles up cookie dough-laden calories.  The ability to twist my aging torso into various unnatural and sometimes inappropriate poses isn't a free pass into Double Chocolate Chip Frappucino Land.  Even after the epiphany that the phrase "Super Size Me" wouldn't be a part of my vernacular, I didn't walk away from the whole yoga scene.  (Okay, I'll just be honest here.  I spent way too much money on instructional dvd's and outfits...plus my butt looked kind of cute in those stretchy pants.)  I decided to give yoga a fighting chance to win my affection, and not be yet another "thing" that I started and never saw to fruition.

My road to enlightenment through yoga has been mostly a farce.  The first time I heard "The spirit of light in me bows to the spirit of light in you", I let out a snort so loud that I had to quickly reign it in before it became a belly laugh.  I don't really "bow" to auras or glows or spirits or any other fairy-tale-type-mystical thing.  Come to think of it, I don't bow at all.  I felt like a total dork listening to the instructor tell me that my own free spirit was "a coiled snake lying in wait at the base of the spine to be released". Huh? And, for as much as I tried to clear my head of any thoughts, I found that I was mostly just thinking of how not to fall asleep because the soundtrack was like musical Ambien.

I decided to ignore the feeling that I was less than six degrees of separation from Yanni, because yoga has some bold check marks in the "Plus" column that running just can't touch.  First of all, I have yet to be chased by a dog while in the half lotus pose. Although, my butt has been sniffed by my own pets while in Uttanasana more times than I care to remember. (Look at me all throwing out some big, ol' yoga words.  It just means bending over and touching your toes, but it sounds totally complicated.)  Secondly, at the end, they MAKE you lie down on the floor and be very still for a good five minutes while they half-whisper sweet nothings to make you relax. Oh yeah, that part is mandatory.

Another reason that yoga won me over is that I don't dread it.  In fact, even though I sweat, and twist, and do backbends and splits like I never knew I could, it makes me feel relaxed, almost margarita-like some days.  There is something to be said for taking an hour of your day and breathing deeply.  (Although, there are more times than not that I use that well-honed lung power to shout out warnings to my kids when they are in a heated battle over the TV remote and I'm trying to balance myself on one leg without crashing into the computer desk.)


I would be lying if I said that I have found some kind of peace and spiritual growth while exploring  chakras and bandhas and blah, blah, blah.  I'm just too cynical to believe that holding a Bow Pose will lead me to a higher consciousness.  (Although I will admit that it has done wonders for my abs!) I guess the most important reason I have stuck it out for four years now is that yoga did something for me that no other exercise ever has: It temporarily removes that feeling I constantly have of wanting to slap stupid people, and that, my friends, is priceless.
Posted by If Only She Had Applied Herself at 4:28 PM