Well, it ain't Ozzie and Harriet...

I consistently suck when it comes to anything that requires a commitment. (The exception would be my cell phone contract, and they not only required a two-year commitment from me, but I also had to promise a kidney and some bone marrow as needed.) I keep telling myself that I could do great things with my life if only I would commit to the process of making it happen. But, in my true slacker fashion, I keep running into the same brick wall every time I think of ways to enrich my life and the lives of those around me. You see, achieving these “great things” requires more energy and stick-to-it-ive-ness than even a truckload of Red Bull and a serious pep talk from Lance Armstrong himself could afford me. And, unfortunately, I’m really okay with that.
I was thinking about my lackluster sense of ambition the other day (while surfing the internet for some obscure 80’s song…you know, instead of applying to grad school or teaching my children to speak French), and I realized that I should try to put a positive spin on my negative track record of completely failing on the follow through. (It must be all this pink and green I’ve been wearing lately that is making me look on the sunny side!) So, I tried to come up with something – anything - that I’ve committed to and actually stuck with like I promised. I could only come up with one thing: I have been with the same guy for twenty-three years.
I’m a horrible wife in every sense of the word. I’m not sure, but it might possibly have something to do with the fact that I have this teeny, tiny, little issue with needing to control everyone and everything I come in contact with. In our wedding vows, we (umm…I) decided to remove the part about “obeying” because I didn’t want to lie right there in front of God and everyone. It’s still a mystery as to why this man didn’t turn and run screaming in the opposite direction from me on our wedding day. I mean, it’s not like I’m a super model who does charity work. My feet smell bad, and I hog the bathroom. You would think that after two and a half years of dating, he would have collected his combat pay and moved on to some sweet doctoral candidate who works with orphaned children and enjoys baking cupcakes for the elderly shut-ins. But, he stayed.
I am difficult with a capital B-I-T-C-H. I have always been a My-Way-Or-The-Highway kind of gal, and he decided to stay on that bumpy road any way. Carol Brady, I am not. I don’t administer shoulder massages after a tough day at the office or sit back while The Man of the House has the final say on issues that affect us all. (Although, I would totally dig having an Alice to live with us for cooking, cleaning, and the occasional madcap adventure.) Even after witnessing my ranting and raving over hand washing and bed pillow placement, he stayed.
What I lack in compassion, I make up for by being completely unsympathetic. Whenever an illness befalls him, he knows to look elsewhere for someone to feel sorry about it. The exchange goes something like this: "Oh, you have a cold?  Well, I gave birth to two children without one, single ounce of medication, so, you know, suck it up."  Doesn't it make you want to rush right out and make me your bride?  Honestly, I'm not sure why he still hangs out with me.  It must be my lasagna...or my awesome brain full of useless music trivia.
So, there you have it.  I did do something I said I would do.  I promised to stick with this guy through the good and the bad, and I actually followed through.  (He can, without a doubt, attest to the fact that we have had more than our share of bad.)  He has put up with The Queen of Mean and lived to tell about it.  It's too bad they don't make a Purple Heart for Courage and Bravery Under Fire from a PMS-ing Know-It-All,   because this guy has certainly earned it. 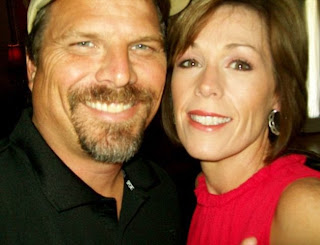 Posted by If Only She Had Applied Herself at 2:51 PM