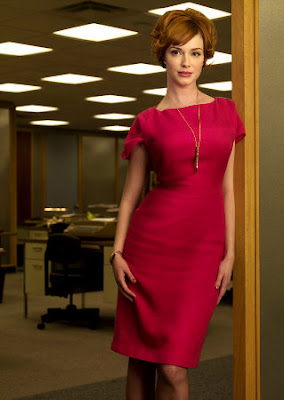 If you don’t watch “Mad Men” on AMC, then bless your heart! You just don’t know what you’re missing. This show follows the fictional employees of a Madison Avenue advertising agency in the early 1960’s, and I am suffering through reruns of “Mythbusters” and “America’s Funniest Videos” just waiting for the new season to start at the end of the summer. It’s smart, unpredictable, and has many times left me with my jaw hanging open. There is so much to love about this series, but I can sum up my favorite part in two words: Christina Hendricks. She is the witty, red-headed, alpha female bombshell in the office, and when I grow up, I want to be just like her.

Christina appeared in the latest edition of “Esquire” magazine and admitted to a love of chocolate covered bacon. (Maybe instead of being like her, I’ll just marry her.) She also penned an open letter to men, sort of giving them the inside scoop on what to do and what not to do when it comes to scoring points with women. I’ll have to be honest, though. I truly thought the only people reading “Esquire” magazine were unmarried, 25 – 33-year-old metro sexual men who live in Manhattan. Evidently, I must be wrong, because I have heard her interview hotly discussed on the internet, radio and television this week.

For as much as I love Christina, the way a super-hot celebrity views men and the way a middle-aged mom in a small, Southern town views men are drastically different. I thought I would take her suggestions to men and un-glam them for those of us sitting in the carpool line with modest bank accounts.

“We love your body.” Hmmm, not so much sometimes. If your belly is showing the effects of a few too many macaroni and cheese-laden church pot luck dinners, and your shirtless back frequently causes you to be mistaken for Sasquatch from behind, then we probably don’t always love your body. However, we still love what is inside, so you have that going for you.

“We remember forever and We remember everything” you say about our bodies and other women. First of all, if you are stupid enough to be talking about how attractive another woman is to you, guess what? Once you regain consciousness, you won’t be around long enough for it to matter. Period. No, I won’t “file the comment away under ‘Women He Finds Attractive’” and then try to emulate her. If I decide to let you hang around, I will throw your comment back in your face each chance I get. (Although to my husband’s credit, he has never publicly admitted that there is another woman in the world better looking than I am. He’s a fast learner.)

“Remember what we like.” It would certainly make me smile if a guy remembered that my favorite flower is the tulip or that I’m obsessed with British history, but this is what is more important: Remember to take out the garbage. Remember to call and reschedule the dentist appointment. Remember to put the lid down. Remember to start the dishwasher. Remember to feed the pets. Remember to bring the laundry downstairs. I can live without flowers, but I hate to run out of underwear. And speaking of underwear…

“Panties is a wonderful word.” If you are a man, do not EVER say panties around me. Ever. You will instantly become Mr. Creepy to me. A mom can say the word to her toddler/pre-school daughter, but no man can roll that word off his tongue without sounding like a pedophile. It’s a little girl’s word.

“We want you to order scotch.” Actually, I want you to order water so that I can order scotch, and you can drive us home. After a day filled with homework, breaking up fights, cooking dinner, yard work and house work, what I find sexy is not a man drinking scotch. It’s a man who is cleaning up dog poop and emptying the dishwasher.

“No shorts that go below the knee and Also, no tank tops.” Although I completely agree with her on this one, what matters more to me is that you know which laundry pile your shorts and shirts belong in, and that you start the washing machine when it’s full of them.

“Marriage changes very little.” This is mostly true if you really know your partner before the wedding. I will add to this, though, that “Having Children Changes Everything”, but she has yet to discover that pearl of wisdom.

I won’t fault Christina for her fairy-tale like list. She doesn’t live in the land of mini-vans, PTO meetings and meat loaf. Hey, we can’t all be domestic divas. I’m willing to bet that more than one soccer mom, down on her hands and knees scraping unidentified goo off the kitchen floor, would willingly trade places with her for a day…or maybe Christina just doesn’t know what she’s missing.
Posted by If Only She Had Applied Herself at 12:04 PM