Grandma almost got run over by a diva in pink Reeboks 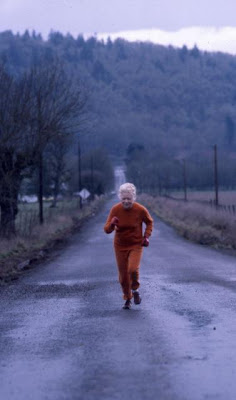 As I was lacing up my running shoes, I was already thinking about being finished and getting back home for my chef-inspired dinner of Special K. (Chocolatey Delight is quite possibly the world’s most perfect food.) I opened the door to a rush of warm spring air, and I made a mental note to be a little more thankful and a little less surly. The weather was ridiculously beautiful, and I have a body that allows me to run and a great neighborhood in which to do it. I should be ashamed of myself for complaining. Who am I kidding, though? I can’t help that I’m not Suzy Sunshine, and I found myself muttering under my breath any way as I headed down the road. “They can invent a pill for a 90 year old man to get his freak on, but there is still no pill to keep Doublestuff Oreos off my thighs? The injustice is staggering.”

I made a firm decision that I wasn’t going to push myself at all today. Maybe I could just run at a slower pace and take in the blue sky, the blooming trees and sweet smells. You know…because I’m such a reflective, easy-going kind of hippie chick…right? Unfortunately for me, my running route includes some really steep hills, so unless I get into my car and drive to a flatter part of town, I have no choice but to man up and climb them. And by that, I mean run them quickly, because the evil, sinister, demonic Nike+ is on my shoe today, mocking me as usual.

As I was recovering from my first pitiful pass over Mt. Everest, I spotted another runner off in the distance. I screamed to myself, “Oh, no, not today! I CAN NOT race today!” (Yes, I understand this is not a normal thought process.) I had a sinking feeling that this runner was none other than the perky teenager that I see from time to time. I don’t know her name, so I just call her Track Team Bitch. She’s beautiful, has a great body, and runs with the ease of a Kenyan. I hate her. Luckily, we have always been running in different directions, so I have never had to assert my middle-aged athletic prowess against her Umm-Like-I-Have-Never-Even-Heard-Of-Bananarama ass. It will be a cruel summer indeed if you mess with me, my pretty.

As the gap between us was closing, I had a decision to make: slow down a little in order to keep a comfortable distance behind her, or suck in a giant gulp of the heavily pollinated air and completely dog her. A little voice that seemed to be coming from my shoe and was not unlike that of Lance Armstrong made the decision for me: Dog her.

I feverishly clicked through my iPod to find the perfect soundtrack for the teenager trouncing that was about to commence. Beck? Too slow. The Cure? I want to run faster, not slit my wrists. Tone-Loc? How did THAT one find its way to my playlist? Then, I heard an unmistakable guitar riff and the very motivational “Kick it!”, and I was on my way with the Beastie Boys. I guess I had to “fight for my right” not to be completely humiliated by someone young enough to be my daughter. (Okay, okay, that was cheesy, I know.)

I stared her down, my pony-tailed opponent, and I was beginning to notice how much she looked like a brunette Tinkerbell in a ball cap. She was all of five feet tall with legs as big around as toothpicks. I suspected wings were beneath her pink tee shirt, but I couldn’t be certain. I glanced around quickly just to be sure Peter Pan wasn’t hiding behind a bush with a baseball bat, just waiting to take me out of the race with a blow to the shin.

I was surprised yet exhilarated by how quickly I was gaining on her. "She must be having an off day, poor baby." I jockeyed for position, moving into the middle of the road so that I could easily pass her and then zip right back in front so that she could slowly digest her defeat. As I was nearly shoulder to shoulder with her, she must have heard me coming because she turned to look at me. I had already prepared a look of snarky satisfaction on my face and was just waiting for the right moment to deliver it.

I locked eyes with the brown-haired fairy and realized, much to my surprise, that this was not Track Team Bitch. This was someone’s grandmother! She was a bona fide senior citizen who had to be at least seventy years old. She was the AARP version of Tinkerbell, and she flashed me a friendly smile, as any grandma would do.

I dogged her any way. I blew Granny's Buick-driving doors off, so to speak. Was this a hollow victory? Probably. Am I still a rock star in my own mind? Absolutely.
Posted by If Only She Had Applied Herself at 12:35 PM