I gave my love a chicken that had no bone... 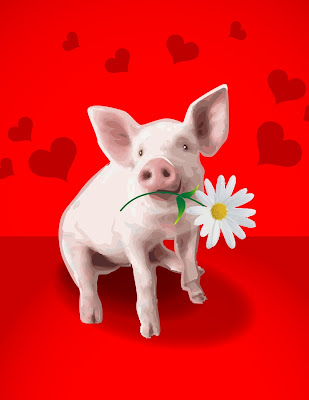 I have been trying to uncover the reasons why I don’t like Valentine’s Day. My gut tells me it’s because I am more like Archie Bunker than I’d like to admit. I am as romantic as gall bladder surgery, and I’m sure my husband would agree that some days, I’m just as painful to live with. A penchant for candlelight dinners and Meg Ryan movies isn’t guaranteed just by virtue of having two X chromosomes. I prefer a dark beer and watching car chases that end badly to champagne and “When Harry Met Sally”. It’s no surprise that when February 14th comes around each year, I just roll my eyes and play along.

Romance and I have always been strangers. Even when I was single, guys never wrote me love letters, not even one. I didn’t inspire a single lovesick teenage boy to put pen to paper and gush over my porcelain skin or the way my eyes sparkled in the moonlight. None of my boyfriends ever felt moved to craft an ode, describing in detail how the world would stop spinning were it not for the simple fact that I lived and breathed and graced this Earth with my presence. Maybe they were all too love struck to put their feelings into words. Yeah, I’m sure that was it. It probably had nothing to do with my caustic, overbearing personality, in case you were wondering.

I sometimes entertain the idea of romance. Who wouldn’t want to be swept away by your soul mate to a faraway tropical paradise and live on love? Mortgages and dental appointments can just be damned. This is your true one and only! All you need to survive is to look deeply into the eyes of your beloved for the rest of your days…or maybe I just stole that whole scenario from a trailer promoting the next season of "The Bachelor".

Now that I have been married for a couple of decades, I can really do without Hallmark making us feel like a tool for not dropping a wad of money on flowers, cards, candy and diamonds. My husband, that lucky lottery winner as I like to refer to him, will definitely be awarded more brownie points by surprising me with flowers on a random Tuesday in August than if he did it on Valentine’s Day. He might just even score a homerun if, in lieu of flowers, he cleans the toilets, puts away the laundry, checks homework, and does the grocery shopping. Now, that’s what I call romance, people. Oh, and Sweetie, since you're up, will you feed the dogs too?
Posted by If Only She Had Applied Herself at 11:00 AM