I coulda been a contender... 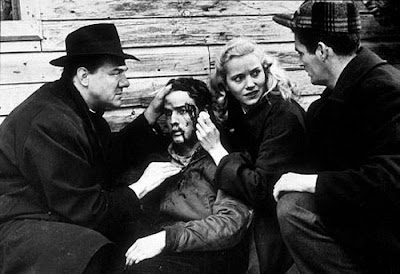 How could I have been so stupid? I guess I shouldn’t be so hard on myself. I realize that being confined to a chair for seven days lends itself to negative thinking. Maybe I should just chalk it up to my fiercely competitive nature instead of stupidity. I will be the winner. I will beat you at any cost. If I can’t be the champion, then I’m taking my ball and going home. I should have known that one day, my flair for “dogging” everyone would catch up with me, and catch up with me it did. It found me, beat the hell out of me, and left me for dead, crumpled in a heap on the floor.

My dedication to/obsession with exercise is fairly common knowledge. It’s as much a part of my life to run six miles, as it is to brush my teeth. I don’t need your silly motivational tricks to get me off the couch. The drive inside of me to be strong, fast and skinny is so powerful that it borderlines unhealthy. So when the president of the company I work for proposed a fitness challenge to hold folks accountable and keep them motivated to exercise, I had to chuckle a bit.  I thought, “Yeah, sure…go on with your little contest because I’m certain most everyone will have dropped out by the fourth week”. Without a doubt, January athletes are one of my pet peeves. The world is on fire to get in shape on New Year’s Day, but by February 1st, they are all back in the drive through line at McDonald’s, eating their Big Macs and loosening their belts. I have no tolerance for lazy.

I planned to sit back and observe this challenge from afar, basking in my athletic superiority. My manager, however, felt very strongly that everyone in our department should participate. I agreed because I knew the challenge would be a breeze for me. The premise of the challenge is that each activity carries a point value (running = 20 points per hour, walking = 10 points per hour, and so on). The participant with the highest number of points at the end is the winner. There was no way that I wouldn’t emerge victorious at the end of the twelve weeks.

The first week, I stepped up my workout routine just a bit. I wanted to make sure that there wasn’t a person competing that would even come close to my points total. I was right. I was the leader the first week, and the person second to me, a guy who is an accomplished athlete, was nearly thirty points behind my total. The second week was the same story. Feel free to call me Wonder Woman. Would you like me to flex my biceps for you? Prepare to be amazed, people.

At the end of the second week, my Tower of Glory came crashing down around me. Staying true to my “How dare you call me weak” mentality, I decided to rearrange my daughter’s bedroom furniture…solo. As I wrestled alone against an unruly dresser that was balking at my attempt to move it across the room, I felt a sensation in my back, a horrible, painful sensation. That dresser was staring at me, and I could have sworn I heard it say, “I just kicked your ass, Wonder Woman.”

As a general rule, I continue to exercise when I have pain. I know it isn’t wise, but I would much rather be slim than wise. This time was no exception. I strapped on a back brace and soldiered on through. I figured that fast-walking nine miles would be just fine, sort of “taking it easy”, instead of my usual running. After a couple of days, I tried a little light jogging and some yoga along with the fast walking for good measure. I had this whole “back pain” thing under control, you see. No piece of furniture was going to get me down. Plus, I had to maintain my fitness challenge points lest some unseasoned exercise novice try to unseat The Master.

After three days of what I call "rest", I awoke in someone else’s body. I couldn’t get out of the bed. I couldn’t brush my teeth. I couldn’t lift my arms. I couldn’t even look down at my feet. It was official: I lost. This trash-talking, badass wannabe couldn’t even put on her pants by herself. Strong? I don’t think so. Invincible? Maybe in my dreams.

So, here I sit on day seven of Chair Prison. The Queen Bee finally got her come-uppance. I had been thinking about writing to make this down time productive, but until the last day or so, I could only type with one hand. To say that I have been humbled by this experience is an understatement.

It’s going to be a long road back to the top of the food chain. I no longer know this body of mine. I will certainly never trust my back - that shrill harpie - again. I’m not quite ready to give up on my quest for Fitness Challenge greatness, though. I will eventually climb out of this chair, toss the heating pad into the closet, and get back on the street. I’m counting on the fact that most of the other competitors will soon be settling back into their old routines of potato chip eating and “American Idol” watching. Come April, I will be back in form and pumping my fists in victory. It will play out like a movie with me, the aging has-been overcoming tragedy to claim the prize. And somewhere in the background, over the din of my adoring fans, I’ll hear the theme from “Rocky” softly playing in my honor.

Now, if only I could tie my own shoe…
Posted by If Only She Had Applied Herself at 7:41 PM