They called it Amazing Grace 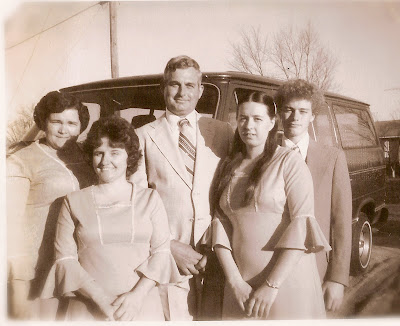 I harbored a painful secret as a pre-teen. It was something so embarrassing to me that I did everything in my power to keep my friends from ever knowing the truth. I just knew that if it was ever discovered, it would bring a horrible shame on me. It would be a shame worse than hurling my lunch on the boy I had a crush on right in the middle of the school cafeteria. Now that I am safely into my forties, it is time to come clean, to rid myself of yet another skeleton... my family was part of a traveling, old time-y, Southern gospel singing band.

That’s right. Although the line-up tended to rotate from time to time, my immediate family was the gospel-singing, prison-ministry version of the Partridge Family, even down to the matching polyester outfits, and my father was their Reuben Kincaid. I traveled around with them to the back-woods country churches, and the charismatic Pentecostal revivals as an unwilling roadie of sorts, not old enough to stay home alone during their concerts, but certainly old enough to be completely mortified at each performance. I endured so many Sunday afternoon covered-dish lunches that I may never eat deviled eggs and potato salad again.

I didn’t even get a reprieve at home. Our house was the “studio”, so our living room held an organ, a piano, and two four-foot tall speakers. On practice days, my sister would set up her drums, my brother would get out his bass guitar and with amplifiers cranked, there wasn’t a single place for me to hide from the music. When the weather permitted, their rendition of “The Old Rugged Cross” would blast out from opened windows allowing every neighbor to be privy to my secret.

Don’t get me wrong. My mother had a very nice voice, and the group was often showered with “love offerings” (money) after their gigs. It’s just that during that period of my life, I was transitioning from Andy Gibb to The B-52’s, and I would have rather had my teeth pulled than listen to hours of church hymns. They were a big hit with the medium-security prisoners, though.

Upon entering junior high school and joining the concert band, my father thought it would be a great idea for me to join the group on my saxophone. I was distraught, thinking the horror would never end. “Oh yeah, the boys are going to love me now” was my first thought. I could picture myself rocking the homemade polyester and lace pantsuit while belting out traditional gospel favorites on my horn. Fortunately for me, the jazzy sound of my alto sax wasn’t a fit for their “Amazing Grace” with a southern twang. I was allowed to keep at least a shred of my dignity and was never officially a part of the group.

Eventually the band decided to go their separate ways citing “creative differences”. (Okay, so I made up that last part.) The equipment was sold, and the members retreated back to the obscurity of the church choir. I had forgotten about “The Gospel Singers” for years until I came across an old picture of them recently. I laughed again at the ridiculous outfits and my brother’s white boy afro. It was bittersweet though, because the leader of the group, my mom, is gone now. But then I had a revelation: isn’t it a parent’s job to completely embarrass their kids every chance they get? Yes, and in that respect, I finally realized after all these years that my mother was a genius.
Posted by If Only She Had Applied Herself at 3:34 PM