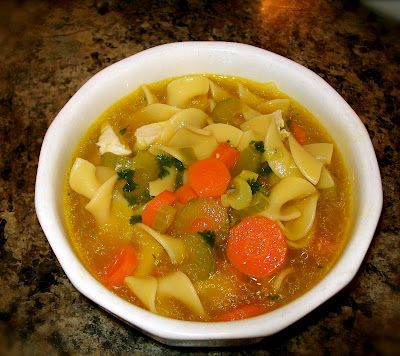 I made soup today. It was homemade chicken noodle soup with vegetables, and it was really tasty. I’m sure that to you, this is hardly newsworthy or even interesting for that matter. For me, though, it was some kind of a breakthrough. I made a meal today that was more than just heating up something that Betty Crocker or Marie Callender started in a factory somewhere. I made a meal that required buying and chopping fresh parsley. This, a steaming pot of soup made by the woman who previously shunned any meal that didn’t have “instant” in the title. It was a home-cooked dinner, meticulously prepared by someone who, before children, thought Jell-O with fruit in it was an acceptable meal. Today, I sautéed vegetables and reduced chicken stock, people. Can you see me beaming across the world wide web?

I have always prided myself on the fact that I hated cooking. Other people cook. I do not. When I was a child, my mother tried to force me into the kitchen to learn the fine art of Southern Cooking. I flatly refused her attempts to domesticate me, to turn me into some lucky man’s slave. That is honestly what I believed. I was convinced that if I was a good cook, or even marginally so, that I would be the personal chef to a husband some day, tied to the stove while he sat in his La-Z-Boy watching football. No way, that is not the person I am. That is not the person I will ever be.

My mother was that person. She was my father’s indentured servant. She would get up before the roosters to make a hearty breakfast for him. She would then put in eight hours at work, only to rush home to get a made-from-scratch meal on the table by the time her husband walked through the door. He would sit in his chair while she plated his food. She brought his drink to him and dropped her fork to assist him immediately if he was ready for a second helping. On many occasions, I saw the man sit in the den hungry, waiting for my mom to get home to prepare a snack for him. He would rather go without food than put a foot in the kitchen to help himself. That disgusted me. It disgusts me still.

Cooking is a chore that ranks right up there with cleaning toilets and damage control after a pre-schooler’s stomach virus, or at least that is what I told myself. It had to be done to survive, but enjoy it? Never. I watched my mother slave away unceremoniously and under appreciated enough to know that ready-to-eat meals were the way for me. Peel potatoes? Forget about it. Homemade Chicken and Dumplings? Why, I never! Then I started thinking back to a conversation I had with a friend. He told me that he had happy memories of his mother, aunts and grandmother in the kitchen, lovingly preparing meals for his family. It was a joy for them to provide this nourishment, these meals from the heart to those closest to them. It made me think that maybe I had a terribly skewed view of something that could actually be fulfilling for me.

So, I started sneaking around the internet looking for recipes, all the while trying to put up a front of indifference towards cooking. The recipes I found called for fresh ingredients and not just “add water and microwave”. I was intimidated, but I didn’t back down. First, I played around with lasagna, and then baked ziti. I tried my hand at some chicken casseroles, and dallied with some marinated steak dishes just to test myself. Then, after a cold snap, I decided I was ready to try soup, some comfort food. I chopped and sautéed and baked and reduced, and consulted the experts just to be safe. The end result was delicious. It was probably the first time everyone at my table agreed on a meal. I was proud.

I’m going to admit right here in front of God and everyone that I actually enjoyed it. I had fun cooking. There, I said it. I realize now that it doesn’t make me a slave to cook a meal for my family. It’s more of an expression of love. One that tastes even better as leftovers.
Posted by If Only She Had Applied Herself at 8:49 PM