It's Just a Little Hocus Pocus 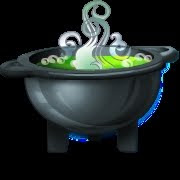 It is comforting to know that I am far from being the only weirdo in this world. By now, it’s no big secret that my mind really does turn in a way contrary to everyone else in line at Target. Lately, I have felt the need to expand my blogging horizons away from this straight-laced town of mine, and decided that Asheville, North Carolina should be my next destination. I have been doing my homework, exploring their local newspaper to get a feel for this Bohemian refuge. It’s clear to me that artists and freaks alike have found a home in this unlikely mountain oasis. I have no doubt that I would fit right in like a missing puzzle piece. Have they been looking for me? I’ve just been lost between the sofa cushions, that’s all. So, you can imagine my surprise and delight when I discovered that one of the newspaper’s featured bloggers is the local village witch, a bona fide Witch-i-poo right there amongst the trendy coffee shops and retro consignment boutiques, and no one is even batting an eyelash. Yes, I think I have found my home.

Let me state for the record that I do not worship dirt or light candles to please the moon. Although I did have to fight the urge to kiss the ground once after a particularly frightening and stormy mid-summer flight from Chicago, and I have been known to praise the Sun for its appearance after a long and rainy autumn. Other than that, skulls and gourds have never been a part of my religious experience. But this woman is the real deal. She describes herself as someone “who writes about traditional Appalachian witching and modern Earth religions.” She is the “Priestess, and Clergywoman of her tradition.” I read her blog in awe, not because of any pearls of wisdom she imparted to me, but because I’m amazed there is a town in what I affectionately refer to as “the armpit of America” that actually promotes the musings of a self-proclaimed witch! And I couldn’t be more excited.

Can you imagine how my fellow Rock Hillians would react if our local paper endorsed writings like, "Tonight, we did Samhain and I included meditation and chanting as part of the ritual. They mostly come out of Christian traditions and have come to Paganism through a hard road. We had a fairly traditional altar with a black cloth and Muerte candles, skulls, black stones, leaves.” I can only imagine that the citizens of this town would rally at the J & K Cafeteria, then charge over in their Chevy trucks to the newspaper parking lot with pitchforks and torches in hand, demanding the dark-haired infidel be burned at the stake. Well, maybe I’m a little dramatic, but my neighbors would certainly fire off some heated, grammatically-incorrect letters to the editor, threatening to cancel subscriptions while invoking the names of Rush Limbaugh and Bill O’Reilly in their defense. Oh yeah, I’m sure of it.

I hope they will embrace me in my new home away from home. I want to be a part of this pocket of diversity, this culture of poetry readings and questionable fashion choices. I want to pretend I’m cool enough to sip my chai latte and discuss the latest gallery opening with the performance artist I met at the dog park. I just want to eat sushi with The Village Witch. So, be sure to leave the light on for me, my new eclectic friends. I’m getting there as fast as I can.
Posted by If Only She Had Applied Herself at 10:04 AM