It Came From Within... 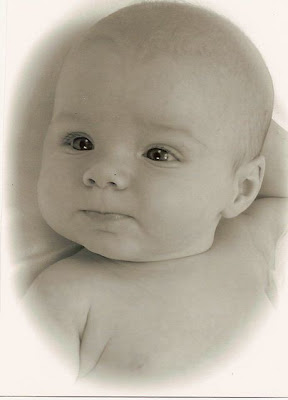 I would be lying to say it was a day just like any other. When you are fifteen months pregnant with a due date three excruciatingly long weeks away, every day could be The Big Day. Even though I had an inkling that something was stirring, I decided it was probably just the hot picante sauce, a steady part of my preggo diet, rearing its ugly head from the night before. This was my second time around, and I was becoming an old pro at this now, certain to recognize labor pains. Or so I thought.

I left for work with an uncomfortable and vaguely familiar sensation spreading through my abdomen. I kept checking the clock during my thirty-minute commute. “I’m sure it’s just cramps” was the lie I was repeating unconvincingly. Those little “cramps” had an undeniable punctuality to them. Every three minutes I would cringe and take a deep breath. I had a brief flash of fear. After my son was born, the doctor told me to be sure with any future pregnancies to let the doctor know that I have a history of rapid delivery. Now, here I was driving in the opposite direction of my doctor with contractions coming at an alarming rate. A scene played out in my head of me, parked along side of the interstate, lying in the back seat of the car, door open with my private parts exposed for all the morning rush hour commuters to see, while a passing UPS driver plays doctor and delivers my daughter somewhere near the South Carolina Welcome Center. The unlikely obstetrician would surely tell his story to the local television station, using words like “crowning”, “vagina”, and “placenta”. Years later, I still shudder at this thought.

I walked into my office and announced to my co-worker, “Good morning! I’m in labor.” She looked at me wide-eyed. “Are you serious?” she asked. “Yeah, contractions are three minutes apart,” I told her, almost as if I was wearing some badge of honor to be standing in my cubicle mere moments from giving birth. I briefly fantasized that the story of my unusually high tolerance for pain coupled with my unwavering company loyalty would find its way back to the company President, who would promptly double my Christmas bonus.

At my friend’s urging, I called the doctor’s office and was told, in no uncertain terms, to get to there now. Once I arrived, they whisked me back to the exam room where it was confirmed that I was 5 centimeters dilated, halfway there. At that moment, I was all at once thrilled to know that I would soon get to meet my daughter and sip a glass of wine at my discretion, and terrified at the excruciating pain that was in my very near future.

In the brief span of time from the doctor’s office to the hospital, the pain seemed to have increased ten-fold. My plans were to change into my fashionable, nurse-issued, cotton lingerie, and walk the halls to hurry this show along. My reality was that I was writhing in the bed, being slammed with contractions that were one after another with no rest in between. I thought my grand plan of “no pharmaceuticals during childbirth” seemed quite foolhardy and lame, that is, when my brain caught a brief respite here and there, and was able to form a thought at all. It didn’t help that I was sent a crusty nurse who kept telling me to “quit fighting against the pain”, as if there was some lady-like alternative to nearly ripping out the bed rails and cursing that bitch, Eve, who started all this in the first place.

When my pain quickly reached its zenith, I threw in the towel and asked, no, begged for an epidural. I could rest, maybe watch “Jerry Springer” or “The View” and perform this miracle of life without breaking a sweat. Alas, it wasn’t meant to be. Before the good doctor arrived with the magic vial of happy numbness, I knew it was time to push. As the troops were scrambled to prepare for the birth, a stranger in a white coat popped his head in the door. “Oops, I guess I’m too late,” he said. Through clenched teeth I asked, “Who the hell was that?” It was the anesthesiologist. I won’t even tell you what I thought of calling him through my thick fog of pain.

With only two pushes, Hannah Noelle arrived in time for lunch. My sweet, tiny princess was here. That was five years ago this week. Only after becoming a parent did I begin to see how quickly the sand flows through the hourglass. It seems like only yesterday I was changing poopy diapers and cursing the high price of baby formula. I’ll try to remember that this week as she struts around in her cowboy boots singing “Hannah Montana” songs. I will make myself stop for just a moment and appreciate this age and understand that soon, her childhood will be a precious memory. Yes, I will remember all of this as I begin to make preparations to have her locked away in the highest room of the tallest tower, guarded by a fire-breathing dragon, and fitted with a padlocked chastity belt until she turns thirty.
Posted by If Only She Had Applied Herself at 9:35 PM