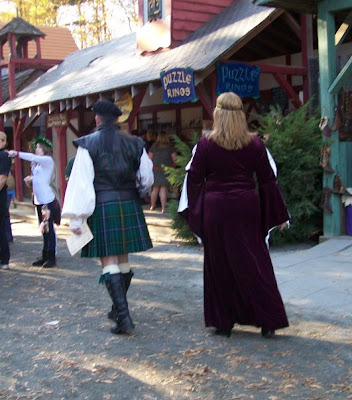 If you are into people watching like I am, there is no better venue than the annual Renaissance Festival. I never miss it. It is a veritable all-you-can-eat buffet of carnival regulars and community theater wannabe’s. If you have a hankering for a corn cob on a stick and some poorly executed British accents, then look no further. The freaks have arrived.

You can’t begin your tour of the pretend sixteenth century without first securing your adult beverage and over-sized turkey leg. Sure, you can try the corn chowder in a bread bowl if it’s a chilly day or sausage on a stick for some variety, but eating a roasted turkey leg the size of an adult male’s thigh is an absolute requirement. It makes me feel all “Henry the VIII” when I walk around with my turkey leg in one hand and a goblet of ale in the other. “Off with her head!” I say, but usually only when some wench is holding up the Porta-John line by yapping on her cell phone. Now, with food and drink in hand, off we go.

The first thing I always notice is bosoms, lots and lots of ample bosoms. They are spilling out every where, from the tavern wench selling beer to the peasant girl washing her make-believe laundry on a rock for our viewing pleasure. I frequently need to avert the eyes of my pre-pubescent son, lest he get a nearly X-rated peep show while waiting in line to ride the Flying Dutchman. “Look”, I say quickly, “here comes the talking tree,” as the well-endowed Lady in Waiting passes too close for comfort. It is evident that modesty is not a virtue for these Renaissance women.

Another festival must-see is the Jousting Tournament. I face a dilemma deciding who to root for each year. It’s a well known fact that I have a thing for bad boys, so I’m usually drawn to the rider in the black cape on a black horse that always seems to pull a dirty trick or two. As I take my place on the bleachers, I think how, back then, this was the big night-on-the-town event for the Renaissance folks. And who among us wouldn’t enjoy getting gussied up and watching as grown men charge at each other, lances in hand, hoping to quickly end the life of his unworthy opponent? As strange as it may seem, I have to admit that I would take watching my fellow man being gored to death over watching “Dancing with the Stars” or “American Idol” any day of the week. Jousting was the original reality entertainment.

No trip to the Renaissance Festival would be complete without emptying my wallet at several of the gift shops along the way. What little girl can live without a twenty-five dollar princess hat that will be squished under her  bed in less than 24 hours? Don’t forget the wooden sword that will set you back another thirty-five bucks or so...you know, the one that will be taken away by the time you get home because your son is bonking your daughter on the head with it. My favorite tent to visit is the one with incense and hemp skirts for sale, though. I know for a fact the stoners behind the counter really dress that way every day, because I saw them recently stocking up on Ramen noodles at Costco.

As the sun starts to descend on the horizon, our trip back in time must come to an end. Another successful freak show is committed to memory. We smile at the dancing maidens, and wave good-bye to the Court Jester. I’m almost reluctant to leave because this is the one place on Earth where, for a couple of hours each year, I am always regarded with a deep bow of respect and the title of “m’ Lady”.
Posted by If Only She Had Applied Herself at 11:34 AM