A Story About Chocolate and Vanilla 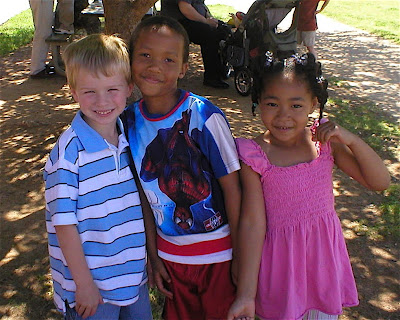 It was no secret growing up that my father was a racist. He did not hide his despicable light under a bushel, my friend. Oh, no. He was a dyed in the wool, almost-card-carrying bigot. I overheard him make the comment once that he thought the KKK was a respectable organization. He even went so far as to boycott “The Jefferson’s” because there was no way he was going to watch George and Weezy live the good life in their “deee-luxe apartment in the sky” while he labored away in a crappy mill town carrying a big, fat grudge on his shoulders. He preached that “those kind of people” were the root cause of everything wrong about our country. He never did figure out that there is no way to find joy in your life when you harbor such hatred and resentment for an entire group of our fellow human beings.

At a very early age, I chose not to subscribe to his philosophy of bigotry. My best friend in elementary school was a beautiful African-American girl named Lisa. This was a secret that I knew better than to share with my father. At eight years old, I couldn’t fathom what it was about Lisa that my father hated. He had never even met her. If he had, he would have seen that she had beautiful skin, impeccably styled hair, clothes that were nicer than mine, and she was one of the smartest kids in the class. What my third grade mind couldn’t comprehend was that by virtue of simply being born with brown skin, my father concluded that Lisa was a second-class citizen, not even worthy of being in the same school as his child.

In junior high, I faced the same challenges, although by now, I understood how simple-minded and backward my father’s beliefs were as we neared the end of the twentieth century. One of my closest friends back then was a smart, good-looking boy who had the biggest heart of any one I knew. His father was educated and successful, and his mom was beautiful, articulate and caring. I loved this boy like a brother, and he was an integral part of our group of friends. His one flaw, according to my father, was the color of his skin.

A defining moment in my life came during a seemingly innocuous outing at his house during a day off from school. Our group had gathered to hang out, eat junk food, and play Dungeons and Dragons. (Don’t hate. It was 1982.) When the time came for my mom to pick me up, my friend, the gentleman that he was, stepped out the door with me to see me to the car. Only, it wasn’t my mom. It was my dad in the car, and he had no idea that my friend wasn’t white. Although he said nothing in the driveway, I was berated the entire way home for associating with “those people”. I was furious right back at him. How dare he judge this beautiful, intelligent person solely based on the color of his skin? I have yet to get over that conversation.

My children will not know this hatred from me. I have within me a gigantic sense of fairness that I can only guess was conceived through years of witnessing my own father’s spittle-flecked, misdirected anger. When my daughter was born, my son, then four and a half, was surprised that she arrived in white skin. He thought it was a crapshoot as to what color your skin happened to be when you are born. He also wants to know why it was such a big deal that our President is an African-American. His response? “Well, why not?” EXACTLY! Why not? That’s my boy. He gets it at nine years of age.

I have no political agenda. I simply have a passionate belief that we are all on this planet together, not to fight but to thrive and revel in our differences, to learn from one another. We are all the same and beautifully different at the same time. We look different. We sound different. We worship and celebrate with our own unique traditions, but pain and happiness are universal. Don’t we all have the same goal - to live a happy, healthy life and raise our families in peace? Please tell me how the color of my skin factors in to that equation.

I know that my one, small voice won’t change the world. My only hope is that by stopping generations of hatred in one family, I have somehow made a difference.
Posted by If Only She Had Applied Herself at 10:54 PM