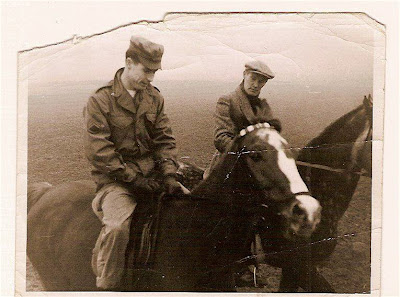 I was so tired. Pulling out of the parking lot from work, all I could think about was how much I just wanted to go home, sit on the sofa and eat a cheeseburger. It was cold and damp. It was January. I really hate January. It’s my least favorite of the twelve months. But there would be no rest for the weary on this night. I had obligations. My mom was expecting me at the hospital. My father was there, and it looked like his days on this Earth were numbered.

He had only been sick since June. One day while watching television, he suddenly lost vision in his left eye. The diagnosis was melanoma – skin cancer that had spread beyond control. It was just that fast. It was in his bones, his lungs, his brain. He was only fifty-eight, but he didn’t even want to fight it. He gave up that very day and let the cancer take its deadly course unchallenged. And now he was in the hospital because his pain had become unmanageable. I know this may sound harsh and I hope that I will not be struck down for admitting it, but I hoped he wouldn’t linger. This was no life. Throw in the towel, man. Surrender. The Big C won this time. I just couldn’t watch it any more.

I was never close to my father. In fact, we spent most of my life as enemies. He was part German, part Irish with some Cherokee Indian thrown in for good measure. This isn’t exactly a great ethnic mix unless you like your men stoic, short-tempered and soaked in alcohol. I just mostly kept my distance and tried my best to be invisible. What I didn’t understand back then, was that our personalities were very much the same. We were both simmering just below the surface at all times. Unfortunately because of this, any time our paths crossed, there was sure to be a firestorm of Biblical proportions. We butted heads nearly every time we spoke to each other. The tension between us was almost palpable.

He decided to live out his last days at home. My mom was his primary caretaker, but I helped, along with my sister, aunts, and fiancé. He quickly became bed-ridden and many times as he lay sleeping, we would walk over and bend down to his nose to make sure he was still breathing. He coughed and hacked and wheezed and wasted away to a wisp of a man.

So here we were in mid-January wondering how long he was going to hold on to this world. As fate would have it, my sister went into labor and gave birth to my niece on Wednesday of that week, the day after my father was admitted. It was a strange dichotomy for our family – the miracle of birth on one floor and the certainty of death on another.

That cold Thursday afternoon as I was driving home from work, I decided to stop by the house to change my clothes and grab a bite to eat before going to the hospital. Who knew how long I might be there in an uncomfortable chair watching the clock and watching his breaths? I was stalling. It was the last place I wanted to be that night.

As I was on my way, my mom leaned down and whispered to my dad that she was heading to the maternity floor to visit my sister. Despite the awful event unfolding, she had a new granddaughter to spoil. Surprisingly, he was conscious and nodded, “Okay”.

My mom arrived back to his room just a few minutes ahead of me. The door was closed and I peeked in to see her standing there by the bed with my aunt. I knew. She didn’t have to say a word. I knew. The battle was over. The burden was lifted. We could exhale. While my mom was out, he decided it was as good a time as any to make his exit. Maybe he wanted to spare her the pain of watching him die. He was stubborn that way.

As I slowly walked into the room, my brain trying to process the scene, she looked at me and quietly said, “He’s gone.”
Posted by If Only She Had Applied Herself at 10:20 PM