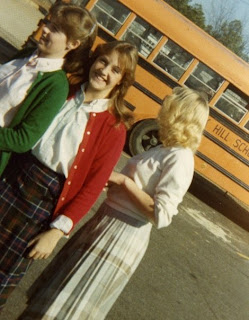 I came across a picture the other day of my best friend from school. That stringy, blonde hair, wide grin and glasses - I couldn’t contain the smile that spread across my face at the sight of her. Some of the best times of my life took place in her company. We were inseparable for many years, and I sorely miss her.
We met in seventh grade. We had an immediate connection, mostly, I think, because we were both a little on the quirky side. Neither of us could really be classified as a beauty back then. We were living in the shadow of over-achieving older siblings. She had the beautiful, smart sister who was a cheerleader and the Homecoming Queen. I had an older brother who was brilliant, earning awards, accolades and being accepted into the Air Force Academy. I had never met anyone that understood my complete silliness and lack of reverence the way she did. It was comforting to have a best friend to help navigate those sometimes stormy waters known as junior high and high school.

Our adventures were many. In the winter of our ninth grade year, we went together on a church trip to Gatlinburg. Mind you, this was a southern Baptist church, so you can imagine that the chaperones held pretty tightly to the reigns so as not to have any levity from us kids. Ah, but my friend and I were rebels. We weren’t going to let them keep us down. Not us. We were cool, edgy. Hey, we even listened to the Violent Femmes. One afternoon, we were given a small window of time to walk around town. I remember it like it was yesterday. We spiked our hair as much as we could, tied bandanas around our necks, and hit the streets. We hoped that the locals would stare at us, and they did, although probably not for the reasons we were hoping. As we walked, I turned to her with excitement and said, “I feel SO PUNK right now!” To which she replied, “Oh my gosh! I DO TOO!” - we simply delighted in our almost-punk-ness.

As members of the French Club in tenth grade, we participated in a field trip to the Biltmore House in Asheville. I remember the glares from the older kids on the bus as my friend and I sang “Come On Eileen” nearly the whole way there. Always looking for a way to be different, we decided to exchange outfits once we arrived. That’s right. We went into the restroom at the Biltmore House, undressed and switched our clothes. We over heard people saying, “They are so weird”, and that was exactly the reaction we wanted.

From marching band camp to cruising Cherry Road to double dating at the Pix theater to summer nights at the “Magic Attic”, it seemed the good times would never end. But as we all know, nothing lasts forever. By twelfth grade, we started to slip away from each other. We both had “serious” boyfriends and spent less and less time together. We squabbled over things that now escape me, and after our graduation, we never saw each other again.

Twenty years later we reconnected via e-mail. We update each other occasionally and exchange Christmas cards. I never made another friend like her. Two peas in a pod, we were. I am confident that, even at our age, we could still get into some trouble should we ever reunite. Unfortunately, I took that silly, irreverent part of me and neatly tucked it away. I pull it out sometimes when I’m sure no one is looking. You know what? I'll bet she does too.
Posted by If Only She Had Applied Herself at 11:15 AM