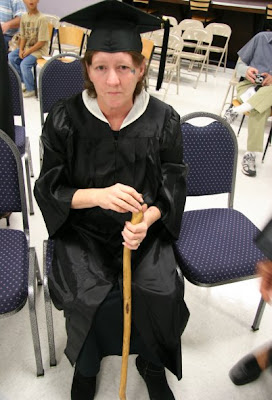 I have a crazy sister. Well, that’s probably unfair because my family is completely dysfunctional, with each member contributing equally to the chaos. You have to imagine that with a family of 6 kids, parents who married far too young, a father that served in the Korean War and then brought home with him Post Traumatic Stress Disorder, there might just be a crazy one out of the bunch.

She’s Bobbie to us, Barbara to the Social Security Administration. Everyone jokes that they could see the little devil waiting to get out even pre-kindergarten. She was born in late 1950’s Germany to a mother that was barely holding on to her sanity with 4 kids under six years of age. Our father was an Army man and frequently away on duty. Because she was so beautiful, Bobbie was doted on and spoiled. All that changed when my brother came along. If you ask me, this was the beginning of her descent into The Dark Side. The classic middle child syndrome.

Bobbie scared the hell out of me. She was in middle school when I arrived. Her path was all but guaranteed by then. She was the wild child – the Black Sheep. I remember so clearly an episode when she engaged herself in a fight with our older sister. Bobbie was holding her against the kitchen counter with a knife pressed to her neck. I was probably all of five years old at the time. I was terrified and vowed to always stay on her good side. She became pregnant at sixteen. I vaguely remember a quickie wedding, and then becoming an aunt in first grade. She married a tall, skinny pothead. Surprised?

Her life was the stuff of soap operas if soap operas took place in trailer parks. She and her husband fought constantly, and the smell of marijuana and beer are what I remember most about her. She made my mother cry so many times that it became commonplace. “Oh, Bobbie’s pregnant again." “Bobbie’s left Eddie again.” "Bobbie doesn’t have enough money for food again”. Eventually, my mom just made sure the kids were taken care of, and left Bobbie to her own devices.

Bobbie left her husband and kids and took off for parts unknown. There were many years when we had no idea where she was living or if she was even living at all. She would call occasionally to say that she was in Arizona or California and that she was “just fine”. She was mooching off friends and strangers, and experiencing a life that would be a nightmare for most normal folks.

She ended up back in Rock Hill when I was in my twenties. She was unfortunately incarcerated for a DUI, and I was faced with the grim task of going to the city jail and delivering the news to her that our father had died. How the hell did I draw the short straw on that one? Something so personal and gut wrenching performed in front of an audience of less than caring officers. I will never forget that day.

A funny thing happened, though. As she was approaching her fifties, she finally became an adult. She gave up her vices and decided to go back to school for her GED. She settled down, married, and was looking forward to joining the ranks of “Adults Who Are Gainfully Employed”.

Just as tragedies seem to follow her, she never got to secure that grown-up job. A little over a year ago, Bobbie and her husband were sitting on their motorcycle at a stoplight with two of their best friends. A drunk driver was speeding behind them and didn’t stop in time. He hit the foursome at full speed. Bobbie’s best friend died at the scene. Bobbie and her husband were permanently disabled from the accident. Her husband lost his leg, and is confined to a wheel chair. He suffered brain damage and requires constant care. Bobbie recovered, but is no longer able to work due to her injuries. Simply put, they struggle.

She soldiers on, though. Often, the cards we are dealt suck. It’s just that simple. She managed to walk across the stage 6 months after her accident and accept her diploma. She’s tough that way. Despite the somewhat shady life she has led, I am so proud of her. That Black Sheep has shown us all a thing or two about what it means to be strong.
Posted by If Only She Had Applied Herself at 10:44 PM