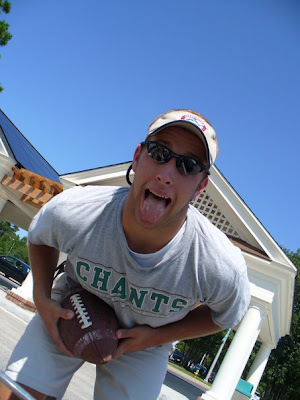 Parents share a common horror – losing their child. For me, it’s such a source of anxiety that I don’t even allow the thought to linger in my mind for more than a second or two. Push it away or else you’ll jinx yourself. I hover over my children and see every stranger as a potential abductor. I tell them to sit straight in their seatbelts for fear of an accident. I live at the end of a quiet street in a “safe” neighborhood, but I still don’t allow my children in the yard without an adult present. Of course I know this is unhealthy, but obsessing is my strong suit.

For about 10 months now, I have been following the blog of a local woman who lost her teenage son in a car accident last June. Her words are so personal and her feelings so raw and unfiltered, that sometimes I feel physically ill after reading them. Her words echo in my head long after each blog entry (“I’m sorry, but we weren’t able to save your son. He died.”), and I can’t imagine her gut-wrenching pain. I have to keep reading though. It’s like a train wreck that you can’t turn away from no matter how hard you try. Twice a week I faithfully log on, just hoping that this will be the week she finds peace. Not yet.

Then it happened again. It was exactly a week shy of the one year anniversary of the blogger mom’s tragedy. Only this time it wasn’t a stranger. This time when I turned on my computer, I saw a familiar name staring back at me. I could only put my hands to my face and breathe deeply. John Daniel had been killed in a car accident.

John Daniel is the son of a family friend. He was the only son, the only child born to parents who adored him, and loved him desperately. He was gorgeous, athletic, charming and the life of the party. As a rising senior in college, he had a promising future in front of him. He volunteered as a coach for a Myrtle Beach high school football team and those kids looked up to him. He was only 20 years old.

His mom confided in friends how it always worried her that she had just one child. What if something happened to him? How would she ever be the same? After he was killed, she said that she had no reason to live now. He was her life. For 20 years, he was the reason for waking up each day. At the funeral home, his dad kept looking at the picture of John Daniel almost as if to remind himself of why he was there. In his mind, I’m sure he was thinking, “This isn’t really happening, is it?” There are just no words to comfort them. They simply don’t exist.

I’ve been haunted by these tragedies - consumed with them, really. That blogger mom gave me a small glimpse into the depths of hell and that impression is forever burned into my brain. I don’t even want to think about the day when my kids are out of the house, driving cars and doing stupid things. You know, like I did and like you did, I’m sure. I just want to hold their hands and keep them safe forever, but that only makes me feel better, not them. For me, the one powerful thought that lingers in my head is how one phone call can change the course of your life forever. It’s that one life-shattering phone call that every parent dreads…

Posted by If Only She Had Applied Herself at 12:53 PM