Not So Good Humor... 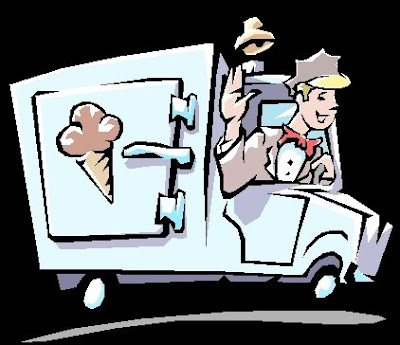 When did an ice cream man become the icon for a drug-addicted pedophile? This strange thought came to me the other day when a yellow, dilapidated ice cream truck pulled in front of me in traffic. It was hard to tell that it was even an ice cream truck (and I still have my doubts.) There were no dancing Popsicles or smiling cones painted on the side. There wasn’t even a fresh coat of paint. Nothing - just a plain, rusty, yellow van. My only clue was the creepy, scratchy sound of a warped rendition of “The Entertainer” playing loudly from speakers that sounded as if the batteries were running low.

My first thought, of course, was, “I better not EVER see you in my neighborhood, you freak.” Then I decided to cut him some slack. Maybe this was a good person just trying to earn a living. It would have been so refreshing to see that it really WAS the Good Humor Man. Remember him? He was clean-cut and smiling from underneath a smart cap, wearing a crisp, white shirt and bow tie. “Please excuse the vehicle, ma’am. The good van is in the shop. How may I help you today?”

When the van stopped and made a slow, left turn, I caught a glimpse in the mirror of the driver. He was so exactly what I expected to see, that I had to laugh out loud. He was dirty-looking with a scruffy beard and greasy hair. He was sporting what appeared to be a mechanic's work shirt. And the best accessory of all? He had a cigarette dangling from his lips. Nice. I’m going to go out on a limb here and say that I’ll bet he was hoping some scantily-clad teen girls were craving ice cream sandwiches on that hot day.

I don’t remember the ice cream man being a creepy figure when I was a child. I have fond memories of muggy, summer nights, playing in the yard and hearing the distant sound of his music playing. You knew the truck was far enough away to give you time to find your mom, get some coins and rush back to the street to wave him down. I always loved the orange “push-ups” and the red, white and blue Popsicles. Between getting ice cream and chasing the city truck that was spraying a cloud of toxic chemicals to kill mosquitoes, you just couldn’t beat growing up in the South. (I think the fact that I actually played in the toxic chemical cloud explains a lot…)

My kids are growing up in a different world than my generation. My daughter has never even seen an ice cream truck. I don’t really believe that people are that much meaner these days. I just think we are more aware of them now. Pedophiles and serial killers have always been among us, just not necessarily driving an ice cream truck. Our parents weren’t glued to the internet and CNN like we are. The media wasn’t bombarding them with dark messages that made them feel like Ted Bundy was lurking around every corner. And even though he probably was, sometimes ignorance is bliss. Hell, we didn’t even have seat belts in our car!

I’m afraid the Good Humor Man of yesteryear has gone the way of dapper, full-service gas station attendants, soda shops and American Bandstand. Our casual, foul-mouthed culture would certainly find them tragically un-hip and without value. Sad really, but life goes on I guess. I do need to say for the record, though, that if that seedy Popsicle-peddler in his rusty, yellow van ever finds his way within 50 yards of my kids, it will most certainly be the last stop on the route for that 21st century Ice Cream Man…
Posted by If Only She Had Applied Herself at 11:43 AM