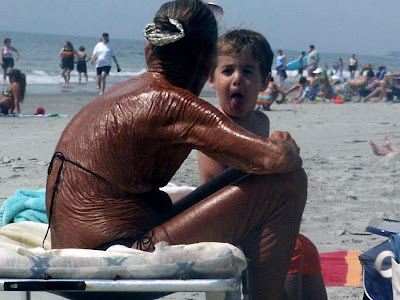 It’s no glamorous job being the Dermoplast Girl. I coined that name for myself about 20 years ago. Sexy, huh? It was borne from the realization that I’m about as pale as they come. And don’t think that fact wasn’t seared into my brain when my good-looking co-worker starting dating “Miss Hawaiian Tropic”. I thought I’d be clever and create a moniker of my very own. Unfortunately, my title didn’t come with benefits such as a sash, crown, or personal appearances at the local Harley Davidson dealership. No, no, no. I only got red skin, peeling shoulders, and certain death from skin cancer.

My parents should have owned stock in Dermoplast. I’m sure all of you folks blessed with an abundance of melanin have probably never even heard of this miracle in a can. It was a pain-relieving topical spray for sunburn sufferers that smelled like the inside of a bicycle tire, and I was coated in it from May to October back in the ‘70’s.

For some reason, my mom was never proactive when it came to preventing sunburn. She was part Cherokee Indian and would easily tan. Apparently, she just didn’t see the need for much sunscreen. You would never even know that she gave birth to me with my lily-white skin. I inherited every gene from the Scotch-Irish part of the family, damn it. And it was such a vicious cycle too – unprotected sun exposure then sunburn then blisters then Dermoplast then peeling then right back out in the sun again. Do you see why I still hate summer?

And it only got worse as I got older. Teenage girls know that teenage boys have zero interest in the pale chicks that look anemic in a bikini, so I lathered up in baby oil and literally cooked my body every summer. I would tell myself that this would be the year I became the hot girl with the native tan. Funny how that never happened… (I also told myself back then that my hair would be thick and luxurious, and I would become bubbly, outgoing and popular. Hmmmm...that never happened either.)

I’m a dermatologist’s wet dream nowadays – pale skin, history of serious sunburns, history of skin cancer in the family, strange spots all over me and extreme anxiety over those strange spots. As I was scorching myself in the sun 2 decades ago, I had no idea I was going to be funding the college education for the children of an overly-chemical-peeled skin doctor. My son and daughter unfortunately look just like me, so I guess it never ends.


It’s such a shame that spray-on tan technology hadn’t been perfected back in the ‘80’s. It would have changed my summer experience altogether. I might have found a boyfriend that actually wanted me for something other than my brilliant mind. (Ok, now that’s just funny.) I chuckle now at the fact that I’m the only person I know that actually “tans” at night.

These days, I get to pretend to be one of the beautiful people. I walk down the beach with confidence, and maybe, just maybe, there might be guys taking a second look at me. Well, especially since my glaring white mid-section isn’t blinding them any more.

Tan girls have all the fun anyway, right? There is no telling what this “native” tan might make me do. You better watch out, boys. This middle-aged, fake-tanned mama might be coming to a wet t-shirt contest near you.
Posted by If Only She Had Applied Herself at 4:00 PM