As I bounce through this life, I have always been a little envious of those who knew their direction. Those who said "I'm going to grow up to be a doctor," and then grew up to become a doctor. Nothing ever felt that pressingly important in my life. It was as if that part of the brain that directs the feeling of "This... This is what I have to be doing with my life," was somehow mis-wired to work erratically. Almost every career I have led (wilderness guide, line cook, pizza chef, college professor, graphic designer, waiter, bartender, bar manager, team development facilitator, landscaper, peddler of outdoor gear, bourbon specialist, camp director... etc... etc... etc.) was important to me at the time, but somewhere deep in the folds of my gray matter, I knew that I could never see myself doing any of them for the rest of my life. It is a bit disheartening to believe that I am destined to roam restlessly looking for that "one thing" I am supposed to be doing.

Last week I had this brilliant moment of clarity. My circuitry wasn't quite as screwy as I had originally thought. There was something that I was supposed to be doing. It is the one thing I have already been doing for throughout life. The one thing that I have a "need" to do and always brings me joy when I do it. And it all came clear because of a bucket.

Frank(the dog) and I were roaming the fields near the train tracks when I found the old galvanized bucket in an overgrown thicket. I knew it needed to come home with me... regardless of the fact that I have buckets at my house and that the four bullet-holes in this bucket have rendered it completely useless for its intended purpose as a vessel of liquid conveyance. And so, it sat under my carport, rusty, misshapened and basically useless, while I pondered its future and occasionally kicked it.

A couple days later, the next-door neighbor finally took down what was left of the white picket fence that was rotting in his front yard. Not intentionally, mind you. He clipped one of the posts with his truck and the whole structure (term used loosely) collapsed in despair. After assaulting the wreckage with a wood axe, he conscientiously drug the detritus to the roadside in front of my house. Assuming that he had gifted his fence to me, I scavenged a few of the less spongy fence slats and stacked them to accompany my bucket.

That night as I was falling asleep, the realization of what that pile in my carport was "supposed" to be came into focus. A mere three days and four trips to Home Depot later, it had developed into exactly(more or less) what I had envisioned. 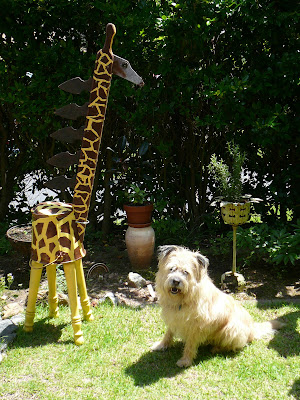 After fixing the neck in place, I stepped back and grinned at the ridiculous goofiness of my project. And that's when it clicked. This is what makes me happy. I am here to create.

I am loath to use the word "artist," because just like chef, professor or doctor, it becomes a label on one's existence and holds a person to a set of expectations, both internally and from others. Besides, some people use that title of "artist" as a license to only use half of their brain and to excuse terrible clothing choices. I take full responsibility for all of my own terrible choices... stylistic and otherwise without blaming it on the fact that I carry a sketch book. I'm just a dude who has an incessant need to express his imagination. Whether it be a comic strip, oil painting or the assemblage of other people's garbage, the creating makes me happy.

All this time I thought I had to be looking for a vocation, when all I needed was the acknowledgment from the inner self that it's okay to do something for the sheer joy of it and not for some extrinsic purpose. This is an integral part of who I am. The same as my curly hair and penchant for sipping expensive bourbon. And I learned it from a bucket and a giraffe.
Posted by If Only She Had Applied Herself at 10:10 AM