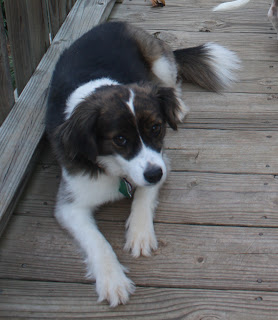 I was hit with a ton of bricks today. It was an epiphany long overdue, but I'll get to that later.

Do you remember Chrissy Snow? It's the character Suzanne Somers portrayed on "Three's Company". I loved that show - the hot chick, the smart-but-not-so-hot chick, the guy pretending to be gay so he could live with the chicks and of course, crazy landlords. You know, I have a "Chrissy" living in my house too - my dog Millie.

Millie is beautiful, sweet and extremely lovable. Like Chrissy, though, she is as dumb as a box of hair. We adopted her from a rescue shelter when she was a year old. My theory is that her previous owners didn't speak English because she doesn't seem to understand a word we say. They didn't speak Spanish or French because we tried those too. (Although the only thing I remember from French class is how to say, "I am 14 years old.")

Millie has been on my mind for days now since I witnessed an act of down right stupidity on her part. I was doing yard work last week and Millie was with me. She went over to one of our very tall trees and sat at the base with her neck craned as far back as it would go. I thought maybe she had treed a squirrel or something, but she didn't bother to even bark or scratch at the tree.

She just sat there. Staring. Not moving. Not barking. Just sitting. Looking. She stayed in that position for nearly two solid hours. I'm not kidding.

My first thought was that she's a really stupid dog. She's so brainless that she thinks she can just sit there and the squirrel or bird or whatever she saw would just relent and march down the tree to her. She was too lazy to even make an effort. Her plan was apparently to sit there, look at this thing she wanted and just hope it would come to her.

Do you see where I'm going with this?

After thinking about this for days, I realized the reason this incident was nagging me endlessly is because I have been sitting at the bottom of the tree my whole life just waiting for the squirrel to come down for me. Really, I'm just like my stupid dog. (Okay, this is where the ton of bricks came in...)

My problem isn't that I'm completely ignorant like Millie. (At least I hope.) For me, it's more of a toxic mix of my ridiculous sense of entitlement and my complete lack of ambition. I want everything I want, but I've never been willing to work for it. If I stare long enough, it will come and make me happy in the process.

I want the perfect, fulfilling job. Oh, never mind that I didn't finish my degree and wouldn't dream of putting in the work to pursue the career that would make me happy.

I want the "Norman Rockwell" family too. Normal people know that maintaining healthy relationships is work. This is another area where I've been failing miserably lately. It's hard being the Queen. You can only sit on your throne and expect your loyal subjects to do your bidding for so long before an uprising starts to brew. I think it's time I got off my royal rear end and go for what I want.

Maybe I should have found this long ago...

"People spend a lifetime searching for happiness; looking for peace. They chase idle dreams, addictions, religions, even other people, hoping to fill the emptiness that plagues them. The irony is the only place they ever needed to search was within." (Ramona L. Anderson)

Yeah, what she said.
Posted by If Only She Had Applied Herself at 8:41 PM