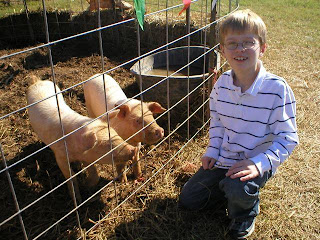 This will probably come as no surprise, but my 9 year old son is a little on the quirky side. I will not deny it is a trait pulled straight from my DNA. Quirky is a little more acceptable at 40 than in third grade though. My experience has shown me that it only gets worse through middle and high school. This is a personality trait that most hot cheerleaders won't find attractive, but I'm secretly okay with that. It will only be cool when he is a Pullitzer Prize-winning author. (Although I'm sure plenty of girls will dig that brooding, artsy type.)

Aside from being guilty through genetics for making him this way, my mothering skills (or lack of) contributed as well. I just wasn't wired for babies and had a hard time with the cutesy, goo-goo baby talk. I treated him more like an adult than a child. I would carry on conversations with him like he understood me. He would look at me like I had lobsters crawling out of my ears, but to this day, his language skills test off the charts. He's just an old soul.

He has a wild and fascinating imagination. This could be in part because I don't allow video games in the house. If you can't entertain yourself, then go read or go outside and ride your bike. Instead of wasting hours in front of the TV screen, he writes and illustrates books. If he is especially proud of his work, he will actually bind them. He even adapted a book into a play for his class. Yesterday, I caught a peek of him putting on a concert in front of his stuffed animals. He was the announcer/director/sound guy and his little sister was on "stage" singing a Jack Johnson song at his request. I love this about him. To me, all of that is better than scoring a touchdown.

I'm really torn. I know it may be hard for him not being the "cool athlete" at school, but I also know that his academic success and pursuit of creativity will be what matters as an adult. Even though he has plenty of friends, he's starting to understand what it means to be popular and the social dynamics are changing each year. I just hope he stays true to who he is and understands that his non-conformity will serve him well one day.
Posted by If Only She Had Applied Herself at 11:46 AM